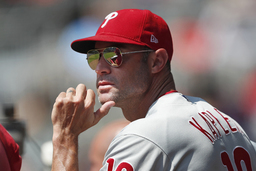 The Astros have an off day Monday ahead of Game 3 in the ALCS in New York on Tuesday. Kapler was fired last week after going 161-163 in two years with the Phillies.

The Cubs are searching for a successor to Joe Maddon, whose contract expired after Chicago missed the playoffs this year for the first time since 2014. At least four other candidates have spoken with the Cubs about the job: Joe Girardi, Mark Loretta, David Ross and Will Venable.