Robles returns to Nationals' lineup for Game 3 vs. Cardinals 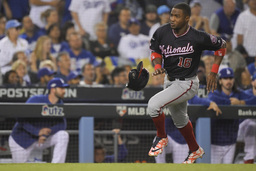 Washington Nationals' Victor Robles scores on a single by Adam Eaton during the second inning in Game 2 of the baseball team's National League Division Series against the Los Angeles Dodgers on Friday, Oct. 4, 2019, in Los Angeles. (AP Photo/Mark J. Terrill) 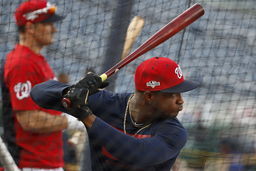 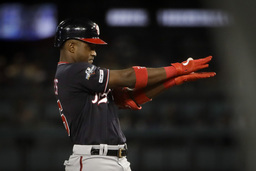 Washington Nationals' Victor Robles celebrates after a double against the Los Angeles Dodgers during the sixth inning in Game 2 of a baseball National League Division Series on Friday, Oct. 4, 2019, in Los Angeles. (AP Photo/Marcio Jose Sanchez)

WASHINGTON (AP) Victor Robles is back in the Nationals' lineup for Game 3 of the NL Championship Series after missing the past five games with a hamstring injury.

Robles is set to start in center field and bat eighth Monday night with Washington looking to take a commanding 3-0 series lead over the St. Louis Cardinals. Michael A. Taylor, who hit a solo home run in Game 2 Saturday at St. Louis, had been in that spot.

Robles hit .255 with 17 home runs and 65 RBIs and had 28 stolen bases during his first full season in the majors. He last played in Game 2 of the NLDS against Los Angeles.