Yankees plan to go all relievers in ALCS Game 4 vs. Astros 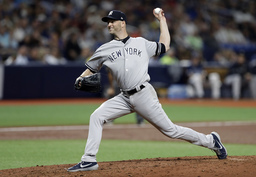 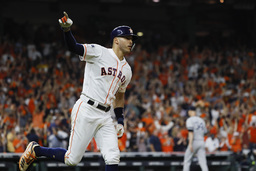 NEW YORK (AP) The Yankees plan to use their bullpen against Houston from the start in Game 4 of the AL Championship Series.

With the best-of-seven series tied 1-1, Luis Severino starts Game 3 on Tuesday against Gerrit Cole. Masahiro Tanaka started the opener and James Paxton was on the mound for Game 2. Manager Aaron Boone plans to use pitchers who have been in the bullpen in the postseason during the fourth game on Wednesday night.

''J.A. Happ could very much be in the mix, as well as I picture our bullpen being unleashed on that day,'' manager Aaron Boone said Monday as the series shifted to New York.

A starter during the regular season, Happ has relieved during the playoffs. The 36-year-old left-hander entered in the 10th inning of Game 2, escaped a two-outs jam, then allowed Carlos Correa's home run leading off the 11th that gave the Astros a 3-2 win.

Weather could cause New York to alter its plans. Heavy rain is forecast for Wednesday, and if Game 4 is postponed, the Yankees would be able to bring back Tanaka, the Game 1 winner, on normal rest.