LEADING OFF: Nats a win from 1st World Series, Cole vs Yanks 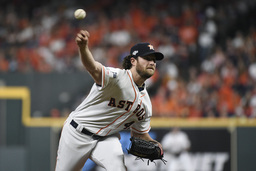 In this Oct. 5, 2019 file photo, Houston Astros starting pitcher Gerrit Cole delivers to a Tampa Bay Rays batter during the first inning during Game 2 of a baseball American League Division Series in Houston. The Astros and their heavyweight rotation have only one chance left to knock out the pesky Rays. It's up to Gerrit Cole in Game 5 on Oct. 10. (AP Photo/Eric Christian Smith, File) 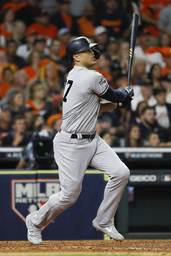 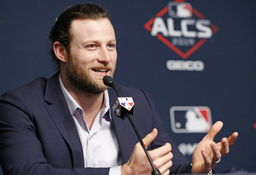 Houston Astros starting pitcher Gerrit Cole talks to the media, Monday, Oct. 14, 2019, at Yankee Stadium in New York on an off day during the American League Championship Series between the Astros and the New York Yankees. (AP Photo/Kathy Willens) 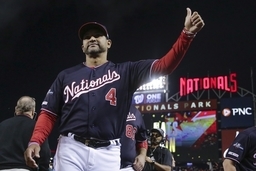 Washington Nationals manager Dave Martinez gives a thumbs up after Game 3 of the baseball National League Championship Series against the St. Louis Cardinals Monday, Oct. 14, 2019, in Washington. The Nationals won 8-1 to take a 3-0 lead in the series.(AP Photo/Jeff Roberson) 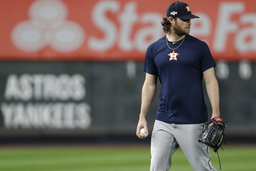 Houston Astros' Game 3 starting pitcher Gerrit Cole leaves the field after a brief workout, Monday, Oct. 14, 2019, at Yankee Stadium in New York on an off day during the American League Championship Series against the New York Yankees. (AP Photo/Kathy Willens) 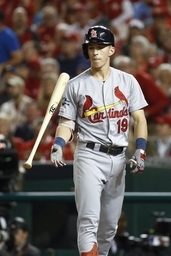 St. Louis Cardinals' Tommy Edman reacts after striking out during the fifth inning of Game 3 of the baseball National League Championship Series against the Washington Nationals Monday, Oct. 14, 2019, in Washington. (AP Photo/Patrick Semansky) 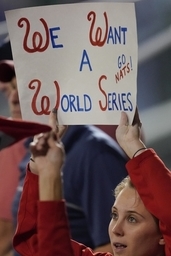 A Washington Nationals fan cheers during the fifth inning of Game 3 of the baseball National League Championship Series against the St. Louis Cardinals Monday, Oct. 14, 2019, in Washington. (AP Photo/Alex Brandon) 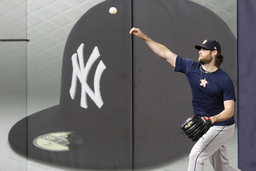 A look at what's happening around the majors Tuesday:

Patrick Corbin can pitch the Nationals to their first pennant when Washington goes for a four-game sweep of slumping St. Louis in the NL Championship Series. The $140 million lefty starts at home against Cardinals rookie Dakota Hudson.

Washington hasn't put a baseball team in the World Series since 1933, when the Senators lost to the New York Giants in five games. The nation's capital owns one MLB championship; the Senators won all the way back in 1924. There wasn't even a baseball team at all in Washington for more than three decades until the Montreal Expos franchise moved to town before the 2005 season and was renamed the Nationals. Until this season, the Nats hadn't won a playoff series, going 0-4 since 2012.

With the Astros and Yankees tied 1-all, the best-of-seven AL Championship Series shifts to New York for Game 3. Houston ace Gerrit Cole, who is 18-0 with a 1.66 ERA in 24 starts since his last loss on May 22, pitches against Luis Severino.

In beating Tampa Bay in Games 2 and 5 of the Division Series, Cole allowed one run and six hits over 15 2/3 innings, striking out 25 and walking three. His winning streak is the longest by a pitcher in one year since Rube Marquard began 19-0 for the 1912 New York Giants, winning 18 of 19 starts and adding a victory in relief.

Cole, primed to become a prized free agent this fall, grew up in California rooting for the Yankees and was drafted by them 28th overall out of high school in 2008. He didn't sign and chose to attend UCLA instead, then was selected first overall by Pittsburgh in 2011.

At times he wondered what his career would have been like in pinstripes, especially when the Pirates were considering trades.

''I don't want to be dishonest and tell you that it didn't cross my mind. Obviously I got drafted by them, so I thought about it then,'' he said. ''And all the rumors going around, it's kind of hard to control what you hear. But as of late it's just been not a thought at all.''

Before setting their lineup for Game 3 against Houston, the Yankees must make a decision on outfielder Giancarlo Stanton. The slugger strained his right quadriceps in the series opener and missed Game 2.

Limited by injuries to 18 games during the regular season, Stanton homered and singled in Game 1. If he were dropped from the roster against the Astros, he would be ineligible to return this year.

''It is a sensitive decision, a tough decision,'' manager Aaron Boone said. ''We'll just try and evaluate and try and get as honest as feedback as we can from Giancarlo.''

Aaron Hicks could get his first start since Aug. 3, taking over in center field from Brett Gardner, who would replace Stanton in left. Sidelined by an injured flexor near his right elbow, Hicks pinch-hit for starting left fielder Cameron Maybin and grounded out leading off the 10th inning in Game 2, then moved to center.

If the Cardinals want to prevent a four-game sweep and get back into the NL Championship Series, their bats need to wake up fast.

St. Louis has all of two runs and 11 hits through three games and trails 3-0. Washington's three starters - Anibal Sanchez, Max Scherzer and Stephen Strasburg - have a combined ERA of 0.00. Strasburg took his turn quieting the Cardinals on Monday night, going seven innings in an 8-1 victory. He finished off each of his 12 strikeouts with an off-speed pitch.

''We haven't scored,'' said Cardinals slugger Paul Goldschmidt, who fanned four times in Game 3. ''We haven't executed as an offense. I haven't really done anything this series, and the results speak for themselves, especially tonight. Just have to do a better job.''

After an agonizing playoff exit, Los Angeles Dodgers manager Dave Roberts and president of baseball operations Andrew Friedman will be back next season.

Roberts led the team to its seventh straight NL West title and a franchise-record 106 wins - second-most in the majors - but has been criticized for his pitching decisions in losing Game 5 of the Division Series to Washington. His in-game tactics during defeats in the 2017 and `18 World Series drew some disapproval, too.

Roberts signed a contract extension through the 2022 season last November.

''When the season ends as abruptly as it did, and it's one of the more painful losses that I can remember, the whole thing is focusing on how we get to winning those 11 games in October,'' Friedman said. ''In our mind Dave is absolutely a part of that.''

Friedman said he expects his own extension to be finalized in the next few days. His $35 million, five-year deal expires at the end of this month.

Pitching coach Rick Honeycutt, 65, will transition to a special assistant role next season, which would be his 15th with the Dodgers.

Kapler was fired last week after going 161-163 in two years with the Phillies.

The Cubs are searching for a successor to Joe Maddon, whose contract expired after Chicago missed the playoffs this year for the first time since 2014. At least four other candidates have spoken with the Cubs about the job: Joe Girardi, Mark Loretta, David Ross and Will Venable.