Rooting for the long-lost Senators: Many memories, few wins 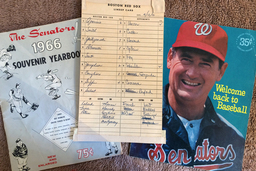 Washington Senators memorabilia including the lineup card from a game between the Senators and Boston Red Sox on April 13, 1971, in Washington, and a program featuring Ted Williams, right, are shown in New York, Tuesday, Oct. 15, 2019. (AP Photo/Ben Walker) 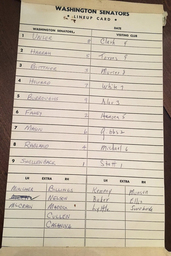 This is the lineup card that hung in the Washington Senators dugout on Sept. 29, 1971, for a baseball game against the New York Yankees at RFK Stadium in Washington, shown in New York Tuesday, Oct. 15, 2019. Ben Walker's favorite Washington Nationals player, back in the day, Del Unser, top left. (AP Photo/Ben Walker) 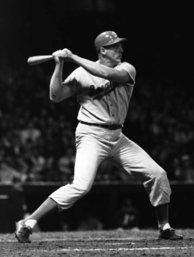 In this May 18, 1968, file photo, Washington Senators slugger Frank Howard connects for a ninth inning home run against the Detroit Tigers, in Detroit. They painted the seats white where Hondo's shots landed in the upper deck.(AP Photo/stf) 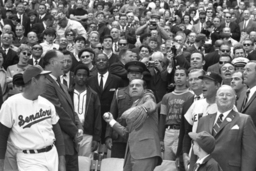 In this April 7, 1969, file photo, President Richard M. Nixon throws out the ceremonial first pitch in Washington as Baseball Commissioner Bowie Kuhn, second from left, and Washington Senators manager Ted Williams, far left, and others, look on. Growing up in the Washington suburbs during the 1960s, the local baseball team was a lost cause, except for a winning record for the expansion Senators after Ted Williams was lured out of retirement to manage the team. (AP Photo, File) 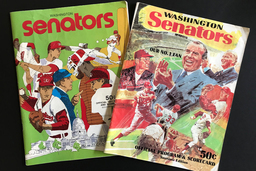 Washington Senators programs, including one featuring Richard Nixon and Ted Williams, right, are shown in New York, Tuesday, Oct. 15, 2019. Growing up in the Washington suburbs during the 1960s, the local baseball team was a lost cause. A trip to the World Series like these Nationals? Forget it. (AP Photo/Ben Walker) 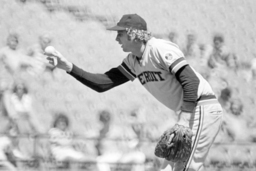 In this June 20, 1976, file photo, Detroit Tigers' Mark "The Bird" Fidrych displays his unique approach to pitching, against the Minnesota Twins, in Bloomington, Minn. Ben Walker and his parents would drive up to see the Baltimore Orioles if they were playing Detroit, and Fidrych was playing. (AP Photo/File) 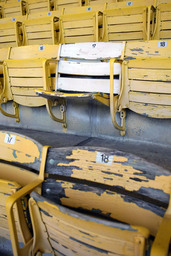 This is a Sept. 16, 2007, file photo showing a white seat in the leftfield upper deck section of RFK Stadium, marking the spot where Washington Senators' Frank Howard hit a home run, at RFK Stadium in Washington. Growing up in the Washington suburbs during the 1960s, the local baseball team was a lost cause. So they found other things to root for, like huge Frank Howard hitting a monster home run _ they painted the seats white where Hondo's shots landed in the upper deck. (AP Photo/Pablo Martinez Monsivais, File) 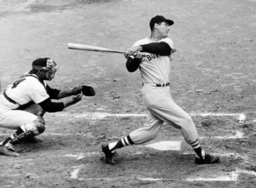 In this April 18, 1960, file photo, Ted Williams of the Boston Red Sox knocks the ball out of the park for a home run in the second inning against the Washington Senators in Washington. Growing up in the Washington suburbs during the 1960s, the local baseball team was a lost cause. So we found other things to root for under the wavy roof at D.C. Stadium and RFK. Like the time Ted Williams came to town. (AP Photo, File) 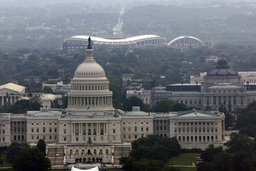 This May 27, 2004, file photo shows a view of RFK Stadium, background, and the Capitol building, in Washington. Growing up in the Washington suburbs during the 1960s, the local baseball team was a lost cause. A trip to the World Series like these Nationals? Forget it. Our Senators were out of it by opening day. So we found other things to root for under the wavy roof at D.C. Stadium and RFK. (AP Photo/Evan Vucci, Files) 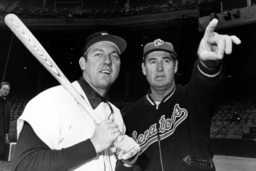 In this April 30, 1969, file photo, Detroit Tigers' Al Kaline has a baseball bat shouldered as he shares a moment with Washington Senators manager Ted Williams, in Detroit. (AP Photo/File) 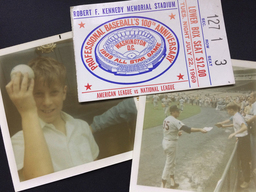 This collage of photos shows Associated Press baseball writer Ben Walker, left, holding the Johnny Bench foul ball that hit him in the head at the baseball All-Star game at RFK Stadium in Washington on July 23, 1969, Ben Walker reaching for an autograph from Atlanta Braves pitcher Phil Niekro, also on July 23, 1969, and the ticket to the game that was rained out on July 22 and played on July 23, 1969. (AP Photo/Ben Walker)

WASHINGTON (AP) We couldn't even win the egg tossing contest.

Growing up in the Washington suburbs during the 1960s, cheering for the local baseball team was a lost cause.

A trip to the World Series like these Nationals? Forget it. Our Senators were out of it by opening day.

So we found other things to root for under the wavy roof at D.C. Stadium and RFK. Like huge Frank Howard hitting a monster home run - they painted the seats white where Hondo's shots landed in the upper deck.

Or flashy catcher Cazzie Casanova whipping the ball back to the mound, faster than ol' curveballer Camilo Pascual pitched it. Or fresh Del Unser flying around the bags, boosting his league-leading triples total.

And, of course, the time Ted Williams came to town.

Which is why I can remember being so excited to go with mom and dad to see a doubleheader against the powerful Minnesota Twins.

Between games, that's the only time our team had a chance.

Hard to imagine now, but that's when they held corny competitions. First, Hondo and Mike Epstein and Ken McMullen took on Harmon Killebrew and the Twins in a Home Run Derby. They each got three swings. We lost.

Then, the egg toss.

Senators shortstop Eddie Brinkman and sure-handed second baseman Tim Cullen stood a few feet apart on one side, Twins infielders Rod Carew and Cesar Tovar on the other. They took turns, moving back a few feet with each throw.

We were bound to win this one - until the raw egg exploded in Steady Eddie's hands.

The old Senators were terrible when dad was a teenage usher at Griffith Stadium in the `40s, hence the label that stuck with them for decades: ''First in war, first in peace and last in the American League.''

At least that version enjoyed an earlier heyday with the great Walter Johnson and won three pennants and a championship from 1924-33. But they moved to Minnesota in 1961 and turned into the Twins.

We got the expansion Senators in their place and they weren't any good either, except for a winning record in 1969 after Ted Williams was lured out of retirement to manage the team. Seeing the Splendid Splinter wearing his familiar No. 9, standing by as President Richard M. Nixon threw out the ceremonial first ball at the opener. It was magical.

Ted's picture was on the cover of game programs that year, next to ''Welcome back to Baseball.'' Plus, we got the All-Star Game. The following year, incidentally, the cover featured a drawing of Nixon - ''Our No. 1 Fan'' - at a packed park.

But usually, it was pretty empty. Sometimes the crowds, if you could call them that, were under 2,000. Fewer fans, however, meant more opportunities for autographs.

I got Al Kaline, Brooks Robinson, Sudden Sam McDowell, lots of big stars along the railing. The Senator signatures meant just as much. They were our guys - Casey Cox, Lee Maye, Joe Grzenda, among others.

There was an ulterior motive to moving down, too.

Back then, pitchers often warmed up in front of the dugout before the game. That was true at many parks. They threw on flat ground, the catcher crouched next to the backstop.

So I would sometimes wander to the front row to barb - as best as an 11-year-old could - the visiting twirlers. They were only 20 feet away. It was easy.

Once I watched a young White Sox pitcher get loose. He had a habit of briefly closing his eyes in mid-motion. Time to rattle the rook.

Me: Hey! You can't see where the ball's going!

Him: Who's your favorite player?

Him: Yeah? Go tell him I'm going to hit him in the head.

Oh, yikes. I remember sitting in fear when Del came up, worried I'd jinxed his career. Thankfully, no beanballs that afternoon.

Many days, the park was a treasure trove.

I got a bunch of balls during batting practice. It was simple: Learn the names of the newest call-ups from the minors, give `em a shout. Toby Harrah overthrew me before his first home game, I corralled it. Couple of cracked bats, too.

Even dad got in on the action. He snagged a souvenir for us by vaulting over a row of seats in section 222 to snare a foul ball by Ed Stroud, just before a beer-splashing, giant-sized fella landed right on top of Pop.

My specialty? Lineup cards. Nowadays, they're prized pieces of memorabilia, often sold or auctioned off. Then, they were scraps taped to the wall. A bat boy cleaning the dugouts after the game would gladly rip them down to give away.

I've got a dozen, with names like Yaz, Reggie and Boog. I still have the lineup card from the last completed Washington Senators game - Sept. 29, 1971, when 4,003 fans showed up for a loss to the Yankees. The next night, the crowd stormed the field in the ninth inning and the game was declared a forfeit.

That finished off another miserable season, the final countdown on the giant Longines clock in right-center field, no more info on the Magic-Message board. The Senators had added faded stars Denny McLain and Curt Flood, to no avail, and the team moved to Texas the next year and became the Rangers.

The closest we ever got to a World Series at RFK Stadium was 1972, right after the Senators left. That's when, probably out of pity, the Pirates and Orioles - who had played in the previous Fall Classic - came for an exhibition game in May. We went, and it was neat seeing Roberto Clemente and Willie Stargell in our park. Kinda sad, too.

By the time I was in high school, the Senators were a distant memory. Sometimes we'd drive up from Rockville to see the Baltimore Orioles - my mom liked watching eccentric Detroit pitcher Mark ''The Bird'' Fidrych talk to the ball.

Some evenings, my dad and I would wander over to Cabin John Park after dinner to watch slow-pitch softball. The fields are close to Walter Johnson High School - after playing, he got into politics in Montgomery County, Maryland.

One summer, we kept noticing a player for Long's Fence, or maybe it was Federal Wrecking. A terrific hitter, but it was how he ran the bases that looked so wonderful. Like a pro, really.

We bumped into him after a game and my dad jokingly suggested he should've played for the Senators.

It was Chuck Hinton. He batted .310 for Washington in 1962 and wore the curly W in the 1964 All-Star Game. Traded to Cleveland, he'd moved back to the D.C. area after retiring.

Guess the Senators hadn't totally left us, after all.