Astros' Peacock to start against Yankees in Game 6 of ALCS 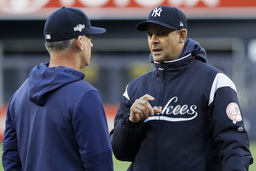 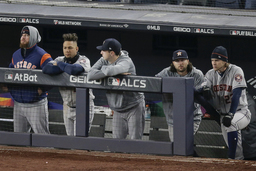 The Houston Astros watch play from the dugout during the ninth inning of Game 5 of baseball's American League Championship Series against the New York Yankees, Friday, Oct. 18, 2019, in New York. The Yankees won 4-1. (AP Photo/Seth Wenig)

HOUSTON (AP) Brad Peacock is starting for the Houston Astros in Game 6 as they use a bullpen day to try to close out the AL Championship Series against the New York Yankees on Saturday night.

Peacock threw eight pitches in a scoreless eighth inning on Friday night. He will become the fourth pitcher in MLB history to finish a postseason game and then start the next day, and the first since 1924.

The right-hander who has been a starter and also pitched out of the bullpen in his career was left off the ALDS roster after missing time late in the season with discomfort in his throwing shoulder. Friday was his first appearance since Sept. 29.

He has a 4.73 ERA in eight career postseason appearances with one start.