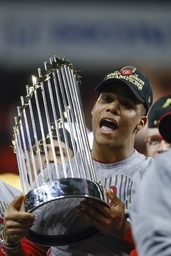 Washington Nationals' Juan Soto celebrates after Game 7 of the baseball World Series against the Houston Astros Wednesday, Oct. 30, 2019, in Houston. The Nationals won 6-2 to win the series. (AP Photo/Matt Slocum) 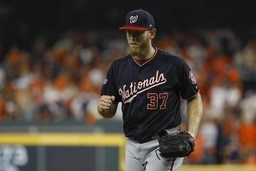 NEW YORK (AP) Washington pitcher Stephen Strasburg and Nationals outfielder Juan Soto have been selected as joint winners of the Babe Ruth award as postseason MVP in voting by the New York chapter of the Baseball Writers' Association of America.

They will be honored at the chapter's 97th annual dinner on Jan. 25 in Manhattan.

Mets rookie Pete Alonso was named recipient of the Joe DiMaggio Toast of the Town award and the Ben Epstein/Dan Castellano Good Guy award on Wednesday. The Yankees' DJ LeMahieu was selected New York player of the year.

Mets broadcaster Ron Darling, who returned to the TV booth in June following treatment for thyroid cancer, will receive the Arthur and Milton Richman You Gotta Have Heart award. Yankees radio play-by-play broadcaster John Sterling, whose streak ended in July after 30 years and 5,060 consecutive regular season and postseason games, will get the Casey Stengel You Could Look It Up award.

Luis Sojo and Al Leiter will receive the Willie, Mickey and the Duke award for people connected in baseball history. The honor comes 20 years after Sojo's ninth-inning single off Leiter in Game 5 of the last Subway World Series lifted the Yankees to their third straight title.