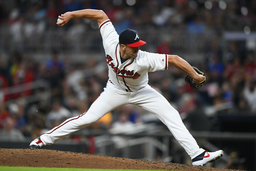 Atlanta announced the deal Friday. The NL East champions have a club option on the contract for 2021 at $3.5 million.

The 37-year-old O'Day appeared in just eight games for the Braves last season due to a right forearm strain. He allowed one earned run in 5 1/3 innings in the regular season, then pitched two scoreless innings in the playoffs.

The sidearmer has pitched in 12 big league seasons and was an All-Star with Baltimore in 2015. He also missed much of the 2018 season because of injuries.