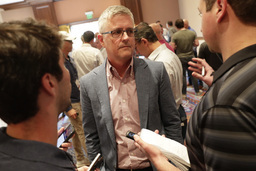 This Sept. 11, 2016 file photo shows a wide angle view of Minute Maid Park in downtown Houston. Major League Baseball has expanded its investigation into the Houston Astros after The Athletic website reported the team stole signs during home games in 2017 by using a camera positioned in center field. The report Tuesday, Nov. 12, 2019 quoted pitcher Mike Fiers, who played for the Astros that season, and three other unidentified people with the club. The Astros won the World Series that year two sources told The Athletic that Houston used the system into the playoffs while another source said it ended before the postseason. (AP Photo/Juan DeLeon, file)

HOUSTON (AP) ��� Not too long ago, the Houston Astros were the feel-good story of baseball. Led by their diminutive Venezuelan dynamo and featuring smart play on the field and in the front office, they emerged from a morass of awful seasons that got them mocked as the ‘Lastros and ascended to the top of the big league galaxy as World Series champions.

That picture of the sheer joy as the Astros celebrated their 2017 crown at Dodger Stadium sure looks different now.

Fresh off a bitter Game 7 loss in their bid for another title, and tarnished by an executive’s clubhouse rant at female reporters and the failed attempt to smear the journalist who wrote about it, the franchise is now embroiled in a new scandal: allegations with on-the-record comments from a former player the Astros turned to technology to devise a sign-stealing scheme during their greatest season.

Sign stealing may be as old as baseball. From a clandestine buzzer-and-spyglass system the New York Giants invented to overtake the Brooklyn Dodgers in their famed 1951 pennant race to the Boston Red Sox being fined for a high-tech ploy using an Apple Watch to pilfer catcher’s signals by the Yankees, cheating is engrained in the game’s lore going back to the day of spitballs.

Getting close to the line, or even crossing it, has long been a part of sports - witness the suspicions that have followed the New England Patriots during their dynasty.

But the Astros are under scrutiny for how they’re said to have gotten around the rules. And it's just one of many ways the team has landed in the news for the wrong reasons in recent years.

The negative backlash includes sign-stealing clouds in the past and an episode this season when the team improperly barred a reporter from the clubhouse. It led, too, to some fans taking to social media this October to say they’d turned against rooting for the Astros.

Major League Baseball is now investigating the Astros after The Athletic website reported the team stole signs during home games in 2017 by using a camera positioned in center field at Minute Maid Park. Tuesday's report quoted pitcher Mike Fiers, who played for the Astros that season, and three other unidentified people with the club.

The Astros won the World Series that year - two sources told The Athletic that Houston used the system into the playoffs while another source said the system ended before the postseason. Using cameras and technology to swipe signs is prohibited by MLB, though there are whispers that many clubs might do it in some form.

"We take the allegation seriously and we're going to look into it," he said at the GM meetings in Arizona. "If you're not following the rules, it's a serious matter. I'm not going to get into exactly what I knew or anybody knew at this point. So I'm just going to have to wait and see. But I'm sure there will be an appropriate time to answer that question directly."

This comes after the team was already under investigation by MLB for the clubhouse incident. Assistant general manager Brandon Taubman was fired for directing inappropriate comments at female reporters, including one wearing a domestic violence bracelet, during a locker room celebration after the team beat the New York Yankees to win the AL pennant on Oct. 19.

Taubman repeatedly yelled toward the group about closer Roberto Osuna, who was suspended for 75 games last year for violating MLB's domestic violence policy and then was traded from Toronto to Houston. Taubman shouted "Thank God we got Osuna!" according to Sports Illustrated, which said he made similar remarks several times, punctuating them with a profanity.

The Astros faced backlash after initially issuing a statement accusing the SI reporter of trying to "fabricate a story." Taubman was fired by the Astros on Oct. 24 and the team has since retracted the statement.

But the damage was already done. While the Astros were competing in their second World Series in three seasons, much of the talk about the team was centered on the clubhouse incident and their handling of the story that followed.

Instead of focusing on brilliant second baseman Jose Altuve, ace starter Gerrit Cole and baseball on the afternoon of Game 1 of the World Series against Washington last month, manager AJ Hinch was being peppered with questions about Taubman's actions.

"I'm very disappointed for a lot of reasons," he said then. "It's unfortunate, it's uncalled for. For me as a leader in this organization down here in the clubhouse, on the field, I take everything that happens in the clubhouse to heart. No one, it doesn't matter if it's a player, a coach, a manager, any of you members of the media, should ever feel like when you come into our clubhouse that you're going to be uncomfortable or disrespected."

That wasn't the first time this year that the Astros faced negative headlines over an incident related to the clubhouse. In August the team barred Detroit Free Press reporter Anthony Fenech from entering the clubhouse until ace Justin Verlander was done speaking to other reporters.

Fenech was eventually let in the clubhouse, but by then Verlander was done with his postgame session and refused to speak to Fenech. Verlander addressed the situation on Twitter the following day, accusing Fenech of unspecified "unethical behavior in the past."

Houston's handling of the situation was against the rules for media laid out in the MLB's collective bargaining agreement and was roundly criticized, but the team never received any discipline which was made public.

All their unsavory headlines this season come after they were also forced to defend themselves against allegations of cheating during the playoffs in 2018.

The Cleveland Indians filed a complaint during the AL Division Series that year after a credentialed Astros employee was observed aiming his phone into their dugout and taking pictures or video. A few days later, the same man was ejected from an area in Fenway Park during Game 1 of the ALCS against Boston. MLB investigated both incidents and found no wrongdoing on the part of the Astros. The league said that the Astros were conducting surveillance and not spying in both instances.

Now that yet another cheating allegation has surfaced against the Astros in a season rife with controversy, it's up to the league to determine if all these problems will simply be a blemish on their reputation or if they'll finally result in discipline that could affect what they're doing on the field.