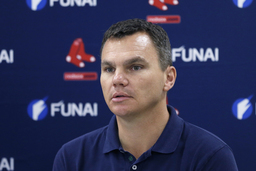 In this March 24, 2014, file photo, Boston Red Sox general manager Ben Cherington is shown during a press conference in Boston. A person familiar with the decision says the Pittsburgh Pirates have agreed to hire Ben Cherington as their general manager. The person spoke to The Associated Press on condition of anonymity Friday, Nov. 15, 2019, because the agreement has not been announced. (AP Photo/Carlos Osorio, File)

PITTSBURGH (AP) Ben Cherington is the new general manager of the Pittsburgh Pirates.

The club announced the move on Monday, three weeks after firing Neal Huntington from the same position following a last-place finish in the NL Central.

Cherington won a World Series ring as general manager of the Boston Red Sox in 2013. He was fired following the 2015 season and spent the last three years as vice president of baseball operations for the Toronto Blue Jays.

Cherington called joining the Pirates the ''ideal opportunity.'' He is the second high-profile hire by Pittsburgh during the offseason. Travis Williams was brought on as team president last month when Frank Coonelly stepped away after 12 years.

One of Cherington's first jobs will be finding a manager. The Pirates fired Clint Hurdle on the final day of the regular season and put the search of his replacement on pause until a new general manager was brought in.