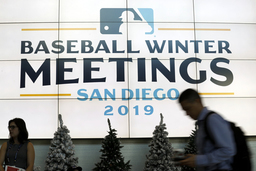 SAN DIEGO (AP) Major league teams are getting an extra roster spot in 2020, and clubs went fishing for options at the Rule 5 draft Thursday.

The Detroit Tigers selected right-hander Rony Garcia from the New York Yankees with the first pick at the winter meetings draft of unprotected minor leaguers. Eleven players were selected during the major league portion, and clubs must keep those players on the major league roster for all of next season or else offer them back to their original team for half of the $100,000 selection fee.

Active rosters are growing by one to 26 next season through Aug. 31, with expanded September rosters slimmed from 40 to 28.

It's an opportunity for players like Garcia, a 21-year-old starter with a four-pitch mix who spent most of last season at Double-A.

''Had a variety of people see him and think it's a good fit for us,'' said Dave Littlefield, Tigers vice president of player development.

Not that there are guarantees. Teams are discussing many options for their 26th spot. Even for a rebuilding club with an eye on the future, stashing a raw prospect isn't the only way to go.

''I was talking to some scouting people. It seems to be the catch-all for everybody,'' Littlefield said. ''It could be an extra outfielder. He could pinch hit, pinch run. It can be an extra guy in the bullpen. There's a lot of scenarios that you try to play out how it could fit.

''You still have to perform. As a Rule 5 pick, he's going to have to stay in the big leagues for the full year and performance is going to dictate that.''

Detroit selected outfielder Victor Reyes with the first pick in the Rule 5 draft in 2017, stashed him successfully, then got a promising result in 2019 when Reyes broke out with a .304 average in 69 games.

There was suspicion teams might be more aggressive in the draft this year because of the extra spot, but the 11 picks were three fewer than last year and four fewer than 2017.

''I think probably all things considered, you would expect with an extra roster spot, you're going to get more selections,'' first-year Red Sox general manager Chaim Bloom said. ''But I also think every team is trying to look at how they can optimize their roster. And I think teams are also very willing to give opportunities to their internal guys. I don't know that we had a right to expect anything in particular coming into this.''