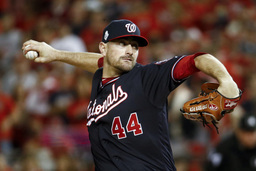 In this Oct. 27, 2019, file photo, Washington Nationals relief pitcher Daniel Hudson throws against the Houston Astros during the eighth inning of Game 5 of the baseball World Series in Washington. The Nationals are bringing back Hudson and adding first baseman Eric Thames. Each deal was confirmed to the AP by people speaking on condition of anonymity because neither has been announced. (AP Photo/Patrick Semansky, File)

WASHINGTON (AP) The Nationals finalized an $11 million, two-year deal with reliever Daniel Hudson on Tuesday that figures to shore up the reigning World Series champions' bullpen.

Hudson will be back with Washington after a successful half season and more that ended with him striking out Houston's Michael Brantley for the final out of the Nationals' Game 7 World Series win. The right-hander went 4 for 4 in save opportunities during the postseason and allowed no runs in seven of his nine postseason appearances.

The Nationals acquired Hudson, 32, from Toronto at the July 31 trade deadline. He went 3-0 with six saves and a 1.44 ERA in 24 games the rest of the regular season.

Hudson's return coupled with the signing of Will Harris makes the Nationals' bullpen appear to be a strength after it was a major weakness early in 2019. Hudson, Harris and holdover lefty Sean Doolittle make up the back end of the bullpen and give manager Dave Martinez more options in the late innings.