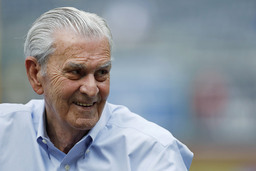 The Glass family said the businessman died Jan. 9. He had been dealing with health issues for some time.

Glass began negotiations early last year to sell the Royals, who reached the World Series twice under his ownership and won the title in 2015. The deal valued at about $1 billion with a group led by Kansas City businessman John Sherman was completed Nov. 26 after Major League Baseball owners voted unanimously to approve it.

Glass began his business career in the 1960s in Springfield, Missouri. He was later recruited by Walmart found Sam Walton to become the company's chief financial officer, and he was promoted to president and CEO in 1988. He served in that capacity for 12 years, helping Walmart through a period of extraordinary expansion.

The family said a memorial will be held Jan. 27 at Northwest Arkansas Fellowship Bible Church in Rogers, Arkansas.