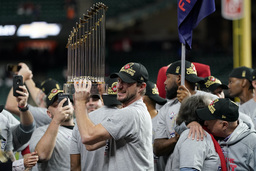 In this Oct. 30, 2019, file photo, Washington Nationals starting pitcher Max Scherzer celebrates with the trophy after Game 7 of the baseball World Series against the Houston Astros in Houston. The Nationals head to spring training with mostly the same squad that won the World Series. They are counting again on being led by a star-studded rotation featuring Scherzer and Stephen Strasburg, along with slugger Juan Soto. (AP Photo/David J. Phillip, File)

WEST PALM BEACH, Fla. (AP) Max Scherzer grunted and cursed his way to 56 pitches during his first formal bullpen session of spring training -- about 20 more throws than other Washington Nationals starters Thursday, but ''standard'' for him, the righty said -- and then was asked about ... the Houston Astros' cheating scandal.

Manager Dave Martinez began camp in the last season for which his contract is guaranteed at the moment -- the Nationals hold an option for 2021 -- and then was prompted to talk about, well, another team entirely.

Nationals players could look around their clubhouse at the Ballpark of the Palm Beaches and see the new locker nameplates or new red-and-blue clocks on the walls or patches stitched to the sleeves of their new jerseys, all festooned with some sort of logo proclaiming the club to be the 2019 World Series champions ... and then were queried about the club that was the runner-up last season.

It was an odd dynamic: The Nationals and Astros were foes last October; Dusty Baker, hired to replace the fired AJ Hinch as Houston's skipper, was Martinez's predecessor in Washington; the teams share a complex in Florida; they will open their Grapefruit League schedule against each other on Feb. 22.

And so Martinez jutted his thumb over his right shoulder, in the direction of Houston's half of the facility, when he said, ''I don't focus on none of that stuff.''

If it takes a lot to render the reigning champs' first official workout of the spring a non-story, well, Houston managed to do just that.

The Astros were punished by Major League Baseball for a sign-stealing scheme that an investigation determined was used during their 2017 run to the title and in 2018, too. They addressed the matter during a news conference that included their owner, Jim Crane, on Thursday, and two players; other players spoke in the team's clubhouse.

''One day of having to answer questions is not going to make this go away,'' said Nationals reliever Sean Doolittle, who also spoke about the effect Houston's cheating had on pitchers who fared poorly against the Astros. ''This is going to be something that they're going to have to work really hard at to show baseball, to show other players, to show fans, that they are remorseful and they do want to move on from this.''

One current Nationals player was on the Astros team that engaged in the sign-stealing: Will Harris, a reliever who switched teams as a free agent this offseason.

''I was on that team. I take responsibility for it just like every other man that was in there,'' Harris said. ''I'm not going to try to separate myself in any way.''