Hader loses to Brewers in arbitration, players drop to 1-6 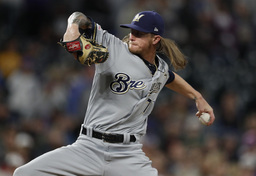 In this Saturday, Sept. 28, 2019 file photo,Milwaukee Brewers relief pitcher Josh Hader (71) in the ninth inning of a baseball game in Denver. All-Star closer Josh Hader went to a hearing with Milwaukee on Thursday, Feb. 13, 2020 after just making the eligibility cutoff with 2 years, 115 days of major league service. Hader asked for a raise from $687,600 to $6.4 million, and the Brewers argued for $4.1 million. (AP Photo/David Zalubowski, File)

Hader will earn $4.1 million rather than his $6.4 million request.

A shaggy-haired left-hander who turns 26 in April, Hader had 37 saves in 44 chances and went 3-5 with a 2.62 ERA in his second straight All-Star season. He failed to hold a 3-1 lead in the eighth inning of the NL wild-card game, loading the bases by hitting one batter, walking another and allowing a bloop single, then giving up a two-out, bases-loaded single to Washington's Juan Soto that scored three runs. The Nationals won 4-3 and went on to their first World Series title.

Dodgers reliever Pedro Baez has been the lone player to win.

Seven players remain scheduled for hearings, which run through Feb. 21.