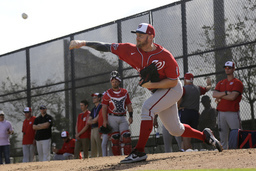 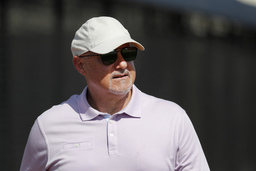 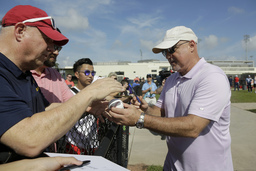 WEST PALM BEACH, Fla. (AP) Count Washington Nationals general manager Mike Rizzo among those not impressed or satisfied by the Houston Astros' attempts to apologize for -- and put behind them -- their sign-stealing scandal.

''They cheated. They were found guilty of it. And I haven't heard it yet,'' Rizzo said Friday after Washington's second formal workout at the spring training complex the team shares with Houston.

''The thing that pains me the most is it puts a black cloud over the sport that I love. And that's not right. The commissioner did an investigation and found that they cheated in 2017 and 2018. Somebody's got to say the words over there: 'cheated.' And that's important to me,'' Rizzo said. ''For the sport to move on, which is what I'm most concerned about, we have to make sure that all the I's are dotted and the T's are crossed on this investigation before we end it.''

Rizzo's NL champ Nationals went into last year's World Series prepared to deal with against-the-rules actions by the AL champ Astros before beating them in Game 7 for the title.

World Series MVP Stephen Strasburg said the Nationals used new catcher's signals and changed them during games, so if Houston had been trying to steal signs in October, there wouldn't be anything from his past outings that could be relied on.

''Regardless of if there was any funny business going on,'' Strasburg said, ''we controlled what we could control, we were prepared for it, and we did what was necessary to go out there and make it as even a playing field as possible.''

Rizzo and Strasburg said people from other teams reached out to the Nationals as soon as it was known their opponent in the Fall Classic would be the Astros.

''We got a lot of volunteer phone calls,'' Rizzo said, ''on how to beat them and how to play them.''

Noted Strasburg: ''The league is a lot smaller than you think.''

Last month, Commissioner Rob Manfred punished Houston for using a video feed to view and decode opposing catchers' signs during the 2017 -- when the team won the championship -- and 2018 seasons. Players banged on a trash can to signal to batters what pitch was coming, believing it would improve chances of getting a hit.

Rizzo made a point of saying the Astros ''cheated to win the World Series.''

Houston's manager, AJ Hinch, and GM, Jeff Luhnow, were suspended by Manfred for a year and immediately fired by the club.

Told of the general nature of Rizzo's comments Friday, Astros pitcher Brad Peacock said: ''I don't know how to answer that. All I know is we're moving forward, looking forward to next year. And everybody spoke yesterday about it. And I agree with everything they said.''

But Rizzo and others noticed that the apologies of a day earlier were mostly rather vague.

Asked whether what his team did was cheating, Astros owner Jim Crane answered: ''We broke the rules and you can phrase that any way you want.''

Houston seemed to be hoping that Thursday's news conference and player interviews would put the subject to rest.

Notes: Rizzo said the Nationals are not looking to make a deal to acquire another third baseman after losing Anthony Rendon to the Los Angeles Angels via free agency. Rookie Carter Kieboom will get a chance to win the opening day job at that position -- which is new for the middle infielder -- and Rizzo spoke about the versatility the team has with veterans Starlin Castro, Asdrubal Cabrera and Howie Kendrick, who all can play multiple positions. ... Asked about his contract expiring after this season, Rizzo replied: ''We never worry about that stuff. ... I was the first employee they ever signed and I'm confident we're still in good shape with each other.