Cubs 3B Bryant: No hard feelings on losing grievance 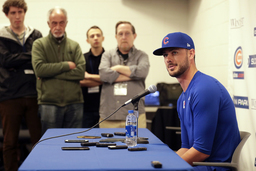 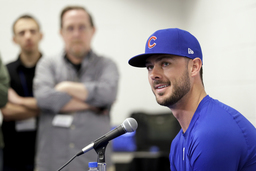 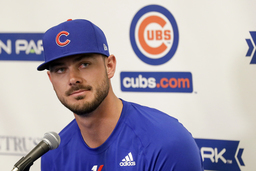 MESA, Ariz. (AP) Chicago Cubs star Kris Bryant realized all along his service-time grievance against the team would be tough to win, and he still believes how he handled himself might help players in the future.

The 28-year-old Bryant will be eligible for free agency in two years after arbitrator Mark Irvings ruled against the third baseman last month. If Bryant had been successful, he could have become a a free agent after the 2020 season.

''I just saw this as a process that is eventually going to help the players in the next round of negotiating and I was going to be that guy to have the courage to do it,'' Bryant said Saturday, speaking to reporters for 35 minutes upon his arrival in Cubs camp.

''I know there's going to be backlash for it and I understand it. It was really important to me to stand up for what I believe in, what we as players believe in and that's a good thing. There's no hard feelings at all.''

Bryant, who has said in the past he hoped to play his entire career with Chicago, remains open to discussions with the club about a long-term deal. Yes, the trade rumors have been disappointing.

''I've always had the stance I want to play here, I love the city,'' Bryant said.

''The only thing that matters is what comes from my mouth, and never once have I said I never wanted to play here. ... I'm always open to it, I'm always here to talk, it's fun to talk about stuff like that. It's a city that I love so much, people I love so much, fans, teammates, everybody here that I'm so comfortable with. Of course you want to be here. I don't hold those cards.''

In his case against the Cubs, Bryant claimed his team kept him in the minor leagues at the start of the 2015 season to delay his free-agent eligibility and that it violated baseball's labor contract. Irvings ruled the players' association failed to prove Chicago's reasons were a pretext to push back his eligibility for free agency.

Bryant joked he ''flipped over tables'' and got in executive Theo Epstein's face after he lost the case. Bryant has an $18.6 million salary for this season after he agreed to a one-year contract Jan. 10, avoiding arbitration.

''I saw this as look, I have one chance at my career and I'm trying to put myself in the best possible situation because I'm not getting any younger, I'm only getting older,'' Bryant said. ''Obviously it would have been great to win, but I lost, we move on, and no hard feelings. ... Maybe a little bit of emotions because it is your career, your livelihood, you want the best - everybody thinks everything should be rosy and we want the best possible situation for yourself - but at the end of it, it was an uphill battle. We had a great case, probably the best one ever if you look at 2013, 2014, 2015.

''I definitely felt that responsibility to take on, to be like, `I want to be the guy that fights for this because I believe that this is right and it's going to help us in two years.'''

During his wide-ranging interview Saturday, Bryant also addressed the Houston Astros' sign-stealing scandal and called it ''a disgrace.'' He expects opposing pitchers to throw at Houston hitters this season.

''It's just hard to believe, it really is. It's sad,'' he said. ''A lot of the apology was a lot about 2017. I'm pretty sure it was going on in 2018 and 2019, too. If they didn't get caught they'd still be doing it. They're only doing this apology because they got caught. There's a lot of feelings on it. I know everybody around the game is really upset and rightfully so. Because it's really a disgrace.''

Bryant said players ''absolutely'' should have been punished.

''I thought the whole punishment was weak,'' he said of the $5 million fine.

''That just feels so wrong. I'm playing golf with my dad, I feel bad for taking a 1-foot gimmee putt. Doing this, this is people's livelihoods they're messing with. Guys never pitched in games since then, guys have won awards that maybe they shouldn't have won. I personally think it's worse than steroids.''

Bryant has done all he can to block out all the trade talk surrounding him - for the past couple of years he has stayed off social media, only reading the screenshots friends and family might send his way ''that I didn't necessarily want to see.'' No, he never turned down an offer that was ''well north of $200 million,'' he said.

''I hope I don't come across as arrogant or greedy or any of those terms,'' Bryant said, ''because that's not who I am.''

Bryant would appreciate the Cubs keeping him ''in the loop a little bit'' given he believes he has ''earned a little respect here just the way I go about my business and the way I am as a player and a person.''

Bryant took guitar lessons and prepared a nursery this offseason to get his mind off his lost arbitration case and all the trade talk. He is ready to become a first-time father and eagerly awaiting the birth of his son. He wants his boy ''to have the coolest shoe collection.''

''It really just puts things in perspective,'' Bryant said, ''it really does.''