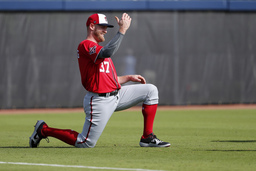 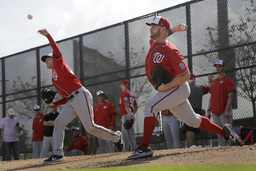 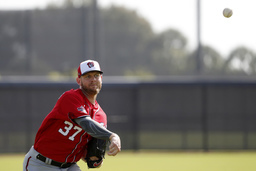 WEST PALM BEACH, Fla. (AP) Stephen Strasburg has no interest in engaging in the typical spring training chatter between a pitcher and his manager or coaching staff or GM.

How did it go out there today? How's the arm after that bullpen session? How do you feel?

''I kind of don't really like people asking me how I'm feeling. Because it doesn't matter, you know?'' the Washington Nationals right-hander explained. ''It doesn't matter in October, so you kind of have to get used to learning to listen to your body, but know when to push, when to scale back, and just try and ride the wave of the season.''

So, naturally, listen to how Nationals skipper Dave Martinez described his regular patter with his guys.

That, in part, is because this spring is different from others for the Nationals: It follows a shorter-than-usual offseason, on account of a longer-than-usual prior season for the World Series champions.

That's why Washington pitching coach Paul Menhart tweaked his guys' routine for camp, having them take two days off between bullpen sessions instead of the customary three. Rain limited Saturday's workout time, but pitchers who were scheduled to throw got their sessions in at the covered batting cages.

In addition, Martinez said his starters' pitch counts are likely to be limited early in the regular season.

Strasburg, who turns 32 in July and signed a $245 million, seven-year contract this offseason to stay in Washington, is coming off quite a workload.

Add in the postseason, and the World Series MVP's full-year inning total was 245 1/3, a career high.

''I was pulling for him. I am so happy for him. He's a quiet, gentle giant that's a warrior, all in one,'' said Dusty Baker, Strasburg's manager in Washington in 2016-17 and now leading the Houston Astros. ''He's learned the science, he's learned his body. I'm sure he's very aware of nutrition. He's no longer a kid. He's a man now.''

Strasburg threw a grand total of 3,943 pitches, also the most for him in a year, as was his 18 games of at least 100 pitches each, including 105, 117, 114 and 104 over his final four outings, which were as high leverage as can be: one apiece in the NL Division Series against the Los Angeles Dodgers and the NL Championship Series against the St. Louis Cardinals, then Games 2 and 6 of the World Series against the Houston Astros.

Throw in his first two showings -- one in relief in the wild-card game against the Milwaukee Brewers, and one in the NLDS -- and Strasburg wound up as the first pitcher in baseball history to go 5-0 in a single postseason. His ERA was 1.98 and he amassed 47 strikeouts and just four walks in 36 1/3 innings.

''It's just even more important to focus on the approach that I had there and not really focus on what the results were, because those are things that are great to talk about, but there were a few games in there that if our guys didn't come out and hit homers, it would have looked way different,'' Strasburg said. ''I was most happy about the way I attacked each pitch, the way I focused on being in the moment and execution, especially in situations where it's very easy to get caught up in what's going on around you and the magnitude of each play.''

He said after his initial spring bullpen session Friday that everything felt normal at the outset, despite all of the extra wear from last fall.

''You just take it one day at a time. I kind of understand my body a little bit better,'' Strasburg said. ''You kind of know what you've got to do to prepare and you just focus on that.''