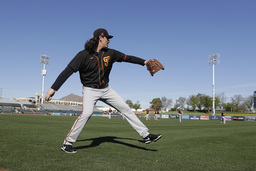 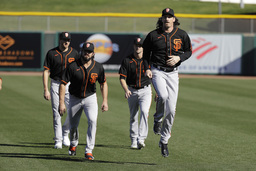 But he sounds willing to embrace the style of his new manager, Gabe Kapler. In fact, the two spent some time together during the offseason in the Bay Area after Kapler was hired in November.

“He’s good, man. I’m excited for the young guys to get to be around him and he’s going to be a great liaison for those guys to figure out what it’s going to take to be successful here,” Samardzija said.

After four seasons with Bruce Bochy, whose managerial style was in line with Samardzija’s approach to the game, the pitcher realizes a new regime isn’t necessarily a bad thing.

Samardzija didn’t need much time to process the change in managers. He has been around the game long enough to know nothing stays the same forever.

“This is what we do,” he said. “There’s turnover all the time, in all aspects of baseball, especially nowadays. Teammates come and go, coaches coming and going.”

The departure of Madison Bumgarner, who started five season openers for the Giants before signing with the Arizona Diamondbacks in December, means someone new gets the ball March 26 when the Giants open on the road in Los Angeles at Dodger Stadium.

Samardzija, 11-12 in 32 starts with a 3.52 ERA over 181 1/3 innings last season, figures to be strongly considered as a top member of the rotation. Right-hander Johnny Cueto also is a candidate.

“Someone’s got to take over for all that awesomeness,” Samardzija kidded about becoming the new Bumgarner.

“It’s always an honor, and it’s always something you strive for as a pitcher, to be looked at in that sense. With that said, I’m very confident that me or Johnny can pitch in any game of the year, any big game."

"I would always love to wear that cap on opening day and do that, but again, it’s not the utmost of priorities,” Samardzija added.

Starter on opening day or not, Samardzija is definitely being counted on to be a leader in the clubhouse and help guide the Giants’ younger pitchers and bring them along. He acknowledged that the team is in a “slight rebuild” and feels confident he will be a Giant all year as opposed to being traded to a contending team at the midpoint.

“A lot of what happens in the future will be determined by the first two or there months of the season,” Samardzija said. “If we go all in with these young kids and the veterans we have here, and believe in the dream of getting in the playoffs and making a run after that, then all things change.”

Kapler said he watched Samardzija taking a leadership role as far back as the middle of this past winter with his workouts.

NOTES: Kapler said all position players have reported to spring training. Physicals took place Sunday and the first full team workout is set for Monday. ... Cueto threw a bullpen session Sunday that stood out for Kapler. “"Loose, relaxed but still explosive, and particularly explosive at the end with balls coming out of his hand really well,” Kapler said. “The pace was really strong.”