'The wall won' - Kemp tries to revive career with Marlins 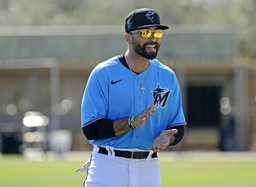 MIAMI (AP) Fans of The Clash, The Bobby Fuller Four and the Cincinnati Reds can agree Matt Kemp had the quote of the year after he broke a rib chasing a flyball last April.

He broke a rib and missed the final five months of the season. Now, at 35, the three-time All-Star outfielder is mounting a comeback with the Miami Marlins.

Kemp believes he's poised for a comeback that extends beyond 2020, and he wants to play at least four or five more years. But first, he has to make the Marlins - a team that won 57 games in 2019.

He signed a minor league contract in December, and with newcomer Corey Dickerson expected to start in left field, Kemp will try to win a spot as a backup in the Marlins' congested but unsettled outfield.

Which is exactly what the Marlins want to hear.

''Matt is in a great spot,'' manager Don Mattingly said. ''He knows where he's at. That's the key for a guy like Matt, where you're not going to be playing six days a week, and understanding that's the role we're looking for.''

Kemp is glad to be reunited with Mattingly, his manager when both were with the Los Angeles Dodgers from 2011-14. Just two years ago, Kemp batted .290 with 25 homers for the Dodgers. But his playing time and productivity declined the second half of that year, and after he was traded to the Reds, his career literally hit a wall.

He immediately feared a serious injury.

It wasn't that bad, but the Reds released him last May. After he signed with the New York Mets, he played in eight games for their Triple-A team.

But the rib still bothered him, and he was done for the season.

Now, he said, he's healthy and looks it. He even had a stolen base in his first spring training game.

''If he can show us he has juice left in the tank, he's a guy who has always hit,'' Mattingly said. ''His foot speed is not quite what it used to be, but he's dangerous off the bench.''