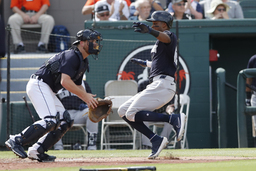 DETROIT (AP) Catcher Jake Rogers was optioned to Triple-A Toledo on Tuesday by the The Detroit Tigers.

Rogers faced a tough competition for playing time after Detroit acquired catchers Austin Romine and Eric Haase in the offseason.

Rogers made his big league debut last season, hitting .125 in 35 games. He was obtained by Detroit in the 2017 deal that sent Justin Verlander to the Houston Astros.

Opening day has been delayed to mid-May at the earliest because of the new coronavirus.