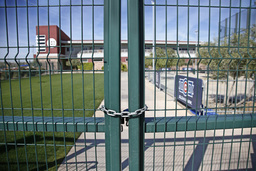 A gate at the Chicago Cubs practice facility at Sloan Park in Mesa, Ariz., is closed and locked Monday, March 16, 2020. The remainder of spring training baseball games have been canceled due to the coronavirus. (AP Photo/Sue Ogrocki) 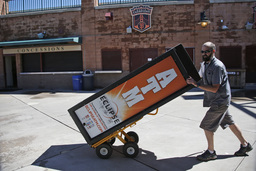 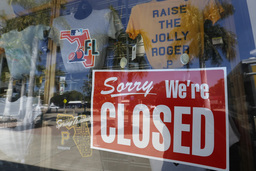 A closed sign is displayed on the Pittsburgh Pirates spring training baseball gift shop at LECOM Park, Monday, March 16, 2020, in Bradenton, Fla. Major League Baseball has delayed the start of its season by at least two weeks because of the coronavirus outbreak and suspended the rest of its spring training schedule. (AP Photo/Carlos Osorio)

NEW YORK (AP) Major League Baseball is considering skipping its amateur draft this year and putting off the next international signing period as a way to preserve cash while games are affected by the new coronavirus, people familiar with the discussions told The Associated Press.

Talks between management and the players' association are ongoing and include the contentious issue of major league service time, which determines eligibility for free agency and salary arbitration. MLB has proposed crediting full service for 130 games or more and proportional service for a shorter season, the people said on condition of anonymity because those details have not been made public.

The union has taken the position that a full season of service should be credited even if no games are played, one of the people said.

Scheduling has been left open since there is no way to determine when the season could start.

Opening day has been pushed back from March 26 to mid-May at the earliest, and both sides are committed to playing as many games as possible.

Some radical solutions, such as more doubleheaders and playing deep into autumn by using enclosed stadiums and warm-weather sites, have not been thoroughly discussed yet.

With the prospect of expected cash not coming in from tickets, broadcast and sponsorship contracts, teams have told the commissioner's office they are fearful they may have to lay off administrative staff. Signing bonuses for amateur players total about $400 million annually.

Baseball moved the first round of the draft to Omaha, Nebraska, ahead of the College World Series in June, but the CWS was canceled last week. The international signing period runs from July 2 to June 15.

While bonus rules for the draft and international players are part of the collective bargaining agreement, management could attempt to cite the national emergency as reason to make unilateral changes. With a Republican administration in Washington, the union would have a difficult path with a legal challenge before the National Labor Relations Board.

The sides also are discussing whether MLB would advance money to players, who get paid only during the regular season. The Uniform Player's Contract has a provision allowing the baseball commissioner to suspend the deal during any national emergency when Major League Baseball is not played.

How much money would be advanced and which players the money would go to are also a part of the negotiation. Advances could go to the entire 40-man roster or a subset.

Also under discussion is the union's desire to have players receive allowance money, even if they have returned home from spring training.

Among the other issues are adjusting salaries, luxury tax rules, revenue sharing and performance bonuses thresholds in the event of a season of fewer than 162 games, and relaxing schedule and roster rules.

Getting money to players with minor league contracts, who are not covered by the union, is likely to be decided later by MLB.

The sides also are discussing a transaction freeze.