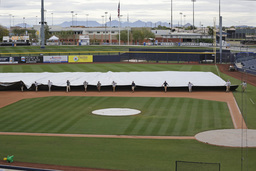 Grounds crew members pull a tarp toward the infield to cover it in anticipation of coming rain after a spring training baseball game between the Los Angeles Angels and the Seattle Mariners Tuesday, March 10, 2020, in Peoria, Ariz. (AP Photo/Elaine Thompson) 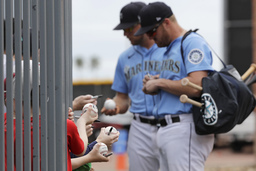 SEATTLE (AP) The Seattle Mariners have shut down their spring training facility in Arizona because of the virus and told their players to view the coming weeks as though they’re in offseason mode.

Seattle general manager Jerry Dipoto said on a conference call Thursday that the club decided to shutter the facility in Peoria, Arizona, for the time being. The Mariners had initially planned to keep the facility open and work with players in small, staggered groups of 10 after Major League Baseball announced it was delaying the start of the season.

But Dipoto said that only a small handful of players were showing up for those workouts and most of the 40-man roster had gone home.

“As we got to the point yesterday where we pulled the plug there were about 10 or 12 guys that were actually coming down and taking advantage of the workout time,” Dipoto said. “And frankly, we were concerned with the idea of group gatherings of any sort, particularly after we got the news yesterday there was a positive test of a baseball staffer down here in Arizona with another club.”

On Wednesday, the Cincinnati Reds, whose training facility is in Goodyear, Arizona, said an employee who works year-round at the complex tested positive for COVID-19. All Reds employees who were in contact with the employee during spring training are being tested and have self-quarantined.

Dipoto said no Mariners players or staff have reported showing any symptoms of coronavirus.

“We're checking in with our players every day,” Dipoto said. “Our medical training teams are checking in using a variety of mediums and right now we don't have a player that's shown symptoms.”

For now, Dipoto and the Mariners staff has told their players to go into a form of offseason mode after nearly a month of building up toward the start of the regular season. Seattle was scheduled to open at home next week against Texas.

Dipoto said the training staff is preparing a series of at-home workouts for players using resistance bands and is developing a “moderate” throwing program. But mimicking the level of work the players were getting in Arizona is not a priority.

“(We’ve) effectively told our guys we need you to go into offseason mode psychologically, emotionally and understand whatever time we get back to playing, we'll have time to ramp back up,” Dipoto said. “We're not going to ask guys to go from, from zero to 60 at the snap of a finger.”

The Mariners have also decided not to open their academy in the Dominican Republic for now. Dipoto said there are a small number minor league players from Venezuela who are unable to return home, but are being housed and fed by the team in Arizona, even with the facility being closed.

As for next steps, Dipoto was planning to pack up and make the drive from Arizona to Seattle in the coming days and start working from home like the rest of the Mariners front office waiting for more direction and information about when the season may begin.

“Right now, our only true concern here is health and well-being, throughout,” he said. “So, it's a strange time in the world for everybody, and for baseball players too. We're just trying to make the right decisions to keep everybody safe.”