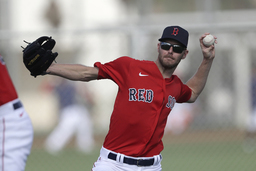 BOSTON (AP) Boston Red Sox ace Chris Sale will have Tommy John surgery on his left elbow, an operation that would keep him out the entire 2020 baseball season if and when it resumes after the coronavirus pandemic.

The team made the announcement on Thursday, two weeks after saying that the 30-year-old left-hander had a flexor strain near the elbow. At the time, the Red Sox hoped Sale would avoid the operation that usually requires a full year to recover from.