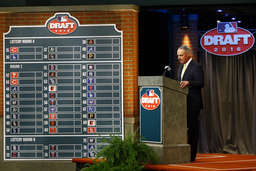 In this June 9, 2016, file photo, Major League BaseballCommissioner Rob Manfred speaks during the MLB draft, in Secaucus, N.J. Major League Baseball will cuts its amateur draft from 40 rounds to five this year, a move that figures to save teams about $30 million. Clubs gained the ability to reduce the draft as part of their March 26 agreement with the players association and MLB plans to finalize a decision next week to go with the minimum, a person familiar with the decision told The Associated Press. The person spoke Friday, May 8, 2020, on condition of anonymity because no decision was announced. (AP Photo/Julio Cortez, File)

CHICAGO (AP) Ethan Hearn has some good friends who are eligible for baseball's amateur draft this year. Hearn is just an interested spectator this time around, and he feels pretty fortunate about his situation.

The 19-year-old catcher was selected by the Chicago Cubs with the 192nd pick of the 2019 draft. The slot value for his spot was $247,000, but the Cubs gave him a sixth round-high $950,000 signing bonus to turn pro instead of playing college ball for Mississippi State.

This year, there is no sixth round. Hearn's signing bonus would have been capped at $20,000.

''I'm very grateful I was drafted last year,'' Hearn said, ''because some of those guys this year, it's going to be crazy.''

Major League Baseball is still finalizing the details for the June 10 draft, but a person familiar with the decision told The Associated Press it plans to cut from 40 rounds to five this year. The person spoke Friday on condition of anonymity because no decision was announced.

Players passed over in the draft are limited to signing bonuses of $20,000 or less.

The changes will save teams about $30 million in a year when the season has been delayed by the coronavirus pandemic and the sport is trying to cut expenses to cope with revenue loss. But it also could cost baseball some marketable stars in the long run - particularly multi-sport high school athletes.

There will be just 160 players drafted, by far the fewest since the annual selection started in 1965.

''It's sad to see, definitely, but I mean with what's happening during this virus and you know there's no games, no money coming in, I guess I do understand it,'' said Michael Limoncelli, a right-hander in the Seattle Mariners' organization. ''But I wish there was more rounds.''

The 19-year-old Limoncelli, a former prep star at Horseheads High School in New York, was selected by Seattle in the sixth round of the 2019 draft. He was planning to play college ball at Coastal Carolina before he received a $500,000 signing bonus from the Mariners, nearly double the slot value of $259,400 for the No 186 pick.

The players' union turned down a proposal that would have kept rounds 6-10 in exchange for cutting their slot values in half.

Asked what he would have done if he was part of this year's class and went undrafted, Limoncelli said he would have played for the Chanticleers. Same for Hearn and the Bulldogs.

''I think, for me, I would have had to go to Mississippi State,'' said Hearn, who is from Mobile, Alabama. ''I feel like coming out of high school, money is a pretty big deal. You've got to be able to sustain yourself with that, and I just felt like I would be worth a little bit more than 20 grand.

''But I mean if you're a junior or senior coming out of college and this is your last year, then you know you've got to take whatever you can get.''

DJ Herz, 19, said he had an amazing time when he went to a pro day held by the Cubs at Wrigley Field about a year ago. The left-hander then was selected by Chicago in the eighth round at No. 252 overall.

Herz, a Fayetteville, North Carolina, native, had committed to play for the University of North Carolina. But he turned pro after the Cubs offered a $500,000 signing bonus, more than triple the slot value of $162,700.

Herz said he would have had a conversation with his father, John, who also serves as his agent, and likely explored a couple different options if he was a part of this year's group and went undrafted.

''Probably me and my dad would think the best situation is to go to college and see what happens the next three years or somehow maybe end up in JUCO to go one year after,'' Herz said. ''The money has to definitely be right for the situation for the high school players or the younger players.''

As part of Major League Baseball's March 26 agreement with the players' association, teams have the right to cut the 2021 draft to as few as 20 rounds. High school ballplayers who go to four-year colleges become eligible for the draft again when they complete their junior or senior years or turn 21. Junior college players are eligible regardless of how many years of school they have completed.

The NCAA limit for baseball programs is 11.7 scholarships, so that could lead more players to take a closer look at the JUCO route.

''I feel like everything happens for a reason, so I'm just glad that I didn't have to go through any of this,'' Herz said, ''because this is hectic and I feel like it's a lot more stressful, especially for younger kids that it was their dream to get drafted.''