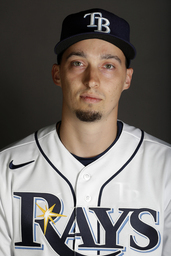 This is a 2020 photo of Blake Snell of the Tampa Rays baseball team. This image reflects the 2020 active roster as of Feb. 17, 2020 when this image was taken. (AP Photo/John Bazemore)

Tampa Bay Rays All-Star pitcher Blake Snell says he will not take the mound this year if his pay is cut further, proclaiming: “I’m not playing unless I get mine.”

“I’m not splitting no revenue. I want all mine,” the 2018 AL Cy Young Award winner said on a Twitch stream Wednesday. “Bro, y'all got to understand, too, because y’all going to be like: ‘Bro, play for the love of the game. Man, what’s wrong with you, bro? Money should not be a thing.’ Bro, I’m risking my life. What do you mean, ‘It should not be a thing?’ It 100% should be a thing.”

As part of the March 26 agreement between Major League Baseball and the players’ association to deal with the delay in the season caused by the coronavirus pandemic, Snell is being advanced $286,500 for the first 60 days of the season through May 24 but would not get any more in 2020 if no games are played. The deal calls for players to receive prorated shares of salary if the season does start; Snell would get $43,210 for each day of the schedule.

Teams say they would lose money if games are played in empty ballparks, and owners on Monday approved making a proposal to the union to base salaries on a 50-50 split of revenue. The union says the concept amounts to a salary cap, which players have long voted never to accept.

“If I’m going to play, I should be at the money I signed to be getting paid,” Snell said. “I should not be getting half of what I’m getting paid because the season’s cut in half, all on top of a 33% cut of the half that’s already there, so I’m really getting like 25%. On top of that, it’s getting taxed. So imagine how much I’m actually making to play, you know what I’m saying? Like, I ain’t making (expletive). And on top of that, so all of that money’s gone and now I play risking my life.”

Bargaining began Tuesday when MLB made an initial presentation of a plan that calls for an 82-game schedule starting around the Fourth of July, which would reduce Snell’s salary to $3,543,210 under the March 26 deal. Frequent testing for the coronavirus would be part of the plan.

Safety is among players’ top concerns.

“If I get the ’rona, guess what happens with that? Oh, yeah, that stays - that’s in my body forever,” Snell said. “The damage that was done to my body, that’s going to be there forever. So now I got to play with that on top of that. So, y’all got to - I mean - you’all got to understand, man, for to go, for me to take a pay cut is not happening because the risk is through the roof, it’s a shorter season, less pay. Like, bro, this - yeah, man, I’ve got to, no, I’ve got to get my money. I’m not playing unless I get mine, OK? And that’s just the way it is for me. Like I’m sorry if you guys think differently, but the risk is way the hell higher and the amount of money I make is way lower. Why would I think about doing that?”

Snell's Twitch stream was posted to Twitter by a person who works with the MLB Network.