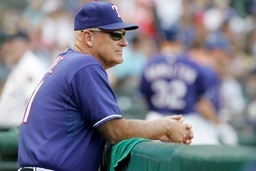 HOUSTON (AP) Former major league manager and infielder Art Howe is in intensive care in a Houston hospital with the coronavirus.

The 73-year-old Howe, best known as the manager of the ''Moneyball'' Oakland Athletics playoff teams in the late 1990s and early 2000s, confirmed to Houston TV station KPRC 2 on Thursday night he has been dealing with the illness since first feeling symptoms of COVID-19 on May 3.

Howe told the station he found out he was positive two days after being tested and tried to recover at home. He went to the hospital by ambulance on Tuesday, and remained in ICU.

''Never experienced anything like it before,'' Howe said, adding that he needs to go 24 hours without a fever before he can be released from the hospital.

He took over the A's in 1996 and managed them for seven years while winning 600 regular-season games and leading Oakland to the playoffs three times. Those teams were known for general manager Billy Beane's then-unconventional method of using sabermetrics to evaluate players. Author Michael Lewis wrote a bestselling book on the A's called ''Moneyball,'' and it was later turned into a film starring Brad Pitt as Beane and Philip Seymour Hoffman as Howe.

Howe was released from his contract with the A's after the 2002 season and became the manager of the New York Mets for two seasons. He most recently served as Texas' bench coach during the 2007 and '08 seasons.