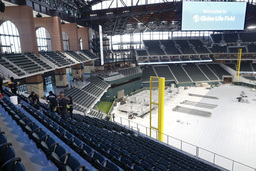 In this March 11, 2020 file photo workers clean seats inside the newly constructed Globe Life Field in Arlington Texas. The Texas Rangers would prefer to stay home in their new ballpark whenever it is time to get back to spring training. They still havent played a game, or even had an organized workout, in their $1.2 billion stadium with a retractable roof. General manager Jon Daniels says, Tuesday , May 19, 2020, there would be a lot of advantages to workouts in Texas instead of returning to their camp Arizona. Spring training has been on hold more than two months ago because of the coronavirus pandemic. (AP Photo/Tony Gutierrez)

The Texas Rangers would prefer to stay home in their new ballpark instead of returning to Arizona whenever it is time to get back to spring training.

They still haven't played a game, or even had an organized workout, in their $1.2 billion stadium with a retractable roof.

Spring training has been on hold more than two months ago because of the coronavirus pandemic, also delaying the start of the regular season. That wiped out two planned exhibition games at Globe Life Field, along with 25 regular season home games so far.

in July. That would be preceded by a second spring training period, and teams could have the option to do that in their home ballparks or at their spring training camps in Arizona or Florida, though there still are

by owners and players.

“Our preference would be to stay here in Texas and have spring training 2.0, or however you want to refer to it,” Rangers president and general manager Jon Daniels said Tuesday. “So if that holds, then we would hold camp here in Arlington.”

The team wouldn't have multiple fields available like at it complex in Surprise, Arizona, but Daniels sees the new stadium as a huge resource with plenty of advantages.

“One of the critical pieces here is being able to space people out responsibly and safely, and we’re going to have as much or more space than anybody. And brand new, clean state-of-the-art facilities,” he said.

The Rangers could also utilize their former home across the street, even though it was reconfigured for football and the short-lived revival of the XFL. There are two weight rooms in the new stadium, and they have another one in the old stadium, which now has a turf field that could be used for throwing programs and maybe even batting practice.

“We have more space, certainly indoor space, here. And then, when you look at the reality of the weather in Arizona ... yeah, you have 6 1/2 fields, but are you really going to use that when it’s 115 (degrees) outside,” Daniels said. “I don’t think that the advantage of the more additional fields would have benefited us, that kind of played partially into our decision to stay here."

Manager Chris Woodward still lives in Arizona, where he was already talking about 105-degree temperatures last week when expressing his preference for workouts in Texas.

Being in Texas instead of Arizona would eliminate the close proximity to some other teams to play additional spring training games before the season. The Rangers would have to depend primarily on intrasquad games to get prepared for the season.

“This year is obviously different from any other year. Our guys know that, and I’ve talked to them at length about that. So anything we do is going to not be normal," Woodward said. “If they’re having to face each other ... I think they’re going to go right after each other.”

Daniels said there have been some informal talks with some other teams about a possible exhibition game or two at the end of spring training, but he's not sure those would even be necessary.

“I don’t think it’s all that important quite frankly. I think we’ll be able to to get our guys enough live looks at each other in intrasquad (games) or live BP or different scenarios,” the GM said. “It kind of falls into that category of an ideal world, great. But we’re not in that situation and so it’s not a requirement for us."

The only baseball at the stadium so far has been some individual and small-group workouts over the past few weeks, including All-Star slugger Joey Gallo and other players who live in the area.

There will plenty of pomp and circumstance before the Rangers play their first game, with about 40 socially distanced high school graduation ceremonies there in the next few weeks.