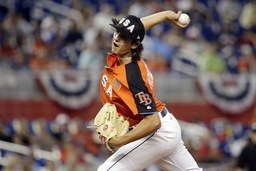 Dodgers head team physician Dr. Neal ElAttrache performed the procedure on the 25-year-old right-hander in Los Angeles on Wednesday, working with Dr. Steven Shin to remove scar tissue from the area of the nerve.

Honeywell, who hasn't pitched in the minors since September 2017, is scheduled to start exercises on Monday at the Rays' spring training complex in Port Charlotte.

Honeywell was among Tampa Bay's top prospects after going 13-9 with a 3.49 ERA in 26 starts for Double-A Montgomery and Triple-A Durham in 2017.

He missed the following season after Tommy John surgery during spring training. He sat out 2019 after an operation last June to repair a right elbow fracture.