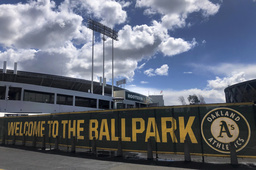 The Oakland Athletics are placing their scouts and selected other front office employees on furlough and cutting the salaries of other executives as part of a cost-cutting move in response to the COVID-19 pandemic.

A person familiar with the plans said Tuesday that the furloughs will begin next week, although the team's amateur scouts are expected to stay on through the draft June 10-11. The person spoke on condition of anonymity because the team hadn't announced the moves.

The furloughs will apply to professional and amateur scouts and other front office employees on the business side.

The A's will continue to pay the health care, 401K and pension costs for their employees.

The person said the team also will cut pay for all front office employees making more than $60,000 with the biggest cuts coming to the highest-paid employees.

The Los Angeles Dodgers are reducing pay for team employees who make over $75,000 because of the coronavirus pandemic. A team spokesman confirmed multiple media reports that said that the pay cuts range from 15% to 35% on salaries above $75,000. There will be no cuts for employees making less than that, and no layoffs or furloughs.

The baseball season has put on hold since March because of the coronavirus pandemic. Owners and players are in negotiations about play an abbreviated 82-game schedule, most likely without fans.

The A's are owned by John Fisher, whose family founded the clothing retailer the Gap. Fisher is worth more than $2 billion, according to Forbes.