Nats star Ryan Zimmerman's AP diary: To play or not to play?

Fri Jun 26 11:34am ET
By RYAN ZIMMERMAN
For The Associated Press 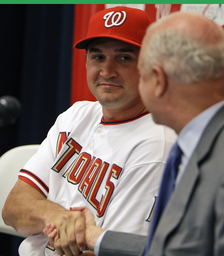 In this April 20, 2009, file photo, Washington Nationals infielder Ryan Zimmerman shakes hands with principal owner Mark Lerner during a news conference at Nationals Park in Washington. Zimmerman has been offering his thoughts, as told to AP in a diary of sorts, while waiting for baseball to return. (AP Photo/Alex Brandon, File)

EDITOR’S NOTE: Ryan Zimmerman is a two-time All-Star infielder who has played 15 years in the majors, all with the Washington Nationals. He holds most of the team’s career hitting records, and his two homers and seven RBIs last postseason helped the Nationals win their first World Series championship. Zimmerman has been offering his thoughts - as told to AP Sports Writer Howard Fendrich - in a diary of sorts while waiting for

to return. In the 10th installment, the 35-year-old Zimmerman discusses what’s on his mind now that there is