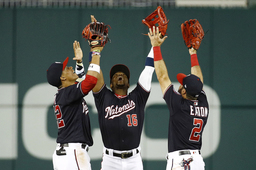 In this June 4, 2019, file photo, Washington Nationals outfielders Juan Soto, from left, Victor Robles and Adam Eaton celebrate after beating the Chicago White Sox 9-5 in an interleague baseball game in Washington. For the 2019 Nationals, Game No. 60 on June 4, 2019, served as something of a microcosm of the whole season and an example of their "Stay in the fight" mindset instilled by manager Dave Martinez. (AP Photo/Patrick Semansky, File) 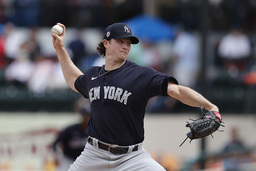 In this March 5, 2020, file photo, New York Yankees starting pitcher Gerrit Cole throws during a spring training baseball game against the Detroit Tigers in Lakeland, Fla. Due to the coronavirus pandemic, Cole still has not made his regular season debut with the Yankees. (AP Photo/Carlos Osorio, File)

The Yankees and Nationals are set meet when the virus-delayed season begins next month, a person familiar with the game told The Associated Press on Saturday. The person spoke on condition of anonymity because there hasn't been an official announcement.

MLB will start a 60-game season on July 23 or 24. The schedule is still being worked out -- there could be a game or two on the first day of play, or a full slate.

Cole started the previous game played at Nationals Park. He pitched the Houston Astros past the Nationals 7-1 last October for a 3-2 edge in the World Series.

Howie Kendrick, Anthony Rendon and the Nationals won the last two games to earn their first championship. Max Scherzer started Game 7 and fellow ace Stephen Strasburg was the World Series MVP, and either of them could start on opening day.

The Yankees and Nationals met twice this year, including New York's 6-3 win on March 12 on the final day before MLB stopped spring training because of the virus outbreak.

Players will begin reporting to summer training camp on Wednesday -- Gleyber Torres, DJ LeMahieu and their New York teammates will work out at Yankee Stadium while Trea Turner, Patrick Corbin and Washington will train at Nationals Park.

The Yankees are hopeful that slugger Aaron Judge has fully recovered from a rib injury that bothered him during spring training in Florida.

Longtime Nationals star Ryan Zimmerman wrote this week in a diary entry for The Associated Press that he's weighing his options with the virus looming.

''I'm still deciding whether to play,'' he said. ''When it comes down to it, it's a decision not just for me, but for my family as well.''

''I have a 3-week-old baby. My mother has multiple sclerosis and is super high-risk; if I end up playing, I can pretty much throw out the idea of seeing her until weeks after the season is over,'' he said.

The schedule calls for clubs to play 10 games each against their four division opponents. There will be 20 interleague games, with MLB intending for East, West and Central clubs to stay in their region.