Betts: Baseball didn't do good job with response to Floyd 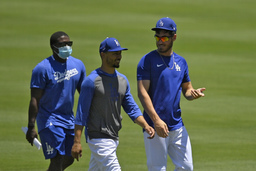 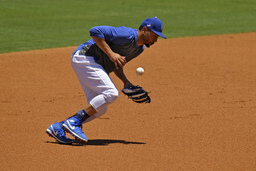 LOS ANGELES (AP) Mookie Betts wasn’t moved by Major League Baseball’s response in the wake of George Floyd’s death in police custody, and the Los Angeles Dodgers’ newest star has a goal of getting the Black community to love baseball as much as he does.

MLB released a statement nine days after the death of Floyd, the Black man who died after a white Minneapolis police officer pressed a knee into his neck for several minutes on May 25. MLB was the last of the major pro sports leagues that either responded to Floyd's death or condemned racism.

“I think baseball did not do a good job with that, but voices were heard,” Betts said Monday on a video conference call with reporters. “That’s the main thing, that we get our voices heard to make some changes. I know it’s not all going to be at one time, but a little change here, a change there, we’ll eventually get to where we need to be.”

Betts said his goal of bringing baseball into Black communities is “more of a personal thing.”

The percentage of Blacks in big league baseball remains low and some think the sport has an image problem because it's too boring.

Betts, the 2018 AL Most Valuable Player with Boston, is one of the game's biggest stars, but his national profile lags behind that of other sports stars who juggle multiple high-profile endorsements.

“Obviously, MLB can help,” Betts said, “but I think it’s on us, as in the Black players, and kind of make baseball cool because I think that’s where the disconnect is. Us, as Black people, don’t think it’s that much fun so we have to find a way to make it fun for the Black community and get more guys here.”

“Guys asked questions, guys gave thoughts and opinions, and it was very well received,” said Roberts, the son of a Japanese mother and Black father. “I just don't want us to lose the traction, the momentum, the conversations that we've had over the last month. That's something that any person of color I think would agree with me, that it just can't be a footnote.”

“To have people that look like you around you, sharing space, having those conversations daily certainly will move the needle ahead,” he said. “That's my goal.”

NOTES: The Dodgers added right-handers A.J. Ramos and Clayton Beeter to their 60-man player pool. Ramos missed last season and part of 2018 due to labrum surgery. Before getting hurt in 2018, the 33-year-old was 2-2 with a 6.41 ERA and 22 strikeouts for the Mets. Beeter was taken 66th overall in this year's amateur draft. The 21-year-old out of Texas Tech made four college starts this season, allowing five runs over 21 innings with 33 strikeouts and four walks.