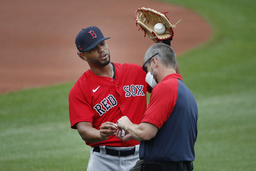 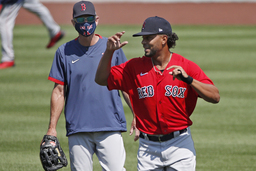 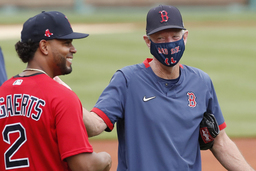 BOSTON (AP) Red Sox shortstop Xander Bogaerts has grown accustomed to being on big stages during his first seven years in the major leagues.

He won a World Series ring as a rookie with the Red Sox in 2013 and became a full-time starter the following season. He's since earned another ring in 2018 and followed that up last year by becoming the first Boston shortstop since Nomar Garciaparra to post 30 home runs and 100 RBIs in a season. It helped Bogaerts earn his second All-Star selection, third Silver Slugger award and a fifth-place finish in American League MVP balloting.

Now, as the Red Sox prepare for the shortened 2020 season with low expectations after trading 2018 MVP Mookie Betts and left-hander David Price to the Dodgers, the 27-year-old Bogaerts believes he's ready to step into a leadership role.

''I think so,'' he said Tuesday. ''Obviously those are two guys that are still missed. Guys that were well-loved by our teammates and obviously the city. So I'm looking forward to the season.''

Usually a reserved presence in the clubhouse, he thinks he's ready to become a louder voice.

Bogaerts has provided stability in Boston's middle infield for the better part of a decade. With second baseman Dustin Pedroia sidelined indefinitely with a knee injury, he's behind only Jackie Bradley Jr. (called up before Bogaerts in 2013) as the longest-tenured player on Boston's roster.

Manager Ron Roenicke said Bogaerts is eager to take on the mental challenges of a season that was cut to 60 games because of the coronavirus pandemic.

''The leadership I started to see a lot last year,'' Roenicke said. ''I think this guy played liked a leader the first year I was here. But I know he became more vocal last year, especially with the Latin players. But I'd say he's more vocal with everybody now.''

Bogaerts said he exchanged text messages with Betts after the trade and acknowledged that he will be ''tough to replace.''

''I've been with him throughout his first years in the big leagues and it's nothing but special things I've seen this kid do,'' Bogaerts said. ''Obviously I wish that he continues to do (well) because he's a such a great guy. ... When he plays us, I hope he loses.''

Bogaerts said he initially had doubts the season would be played, but so far has been pleased with the Red Sox's diligence in adjusting to the pandemic.

Bogaerts said he expects it will take time for him to get used to not high-fiving or hugging his teammates. Roenicke has been reminding players about social distancing guidelines since camp began.

He said doesn't agree with pundits who don't expect much from Boston this season.

''With the lineup that we have and the team that we have and roster that we have, I don't even understand how we're that much of an underdog,'' Bogaerts said. ''On paper we're pretty solid. It's just gonna be up to us and the organization to do things the right way and stay healthy for a long period of time.''

NOTES: Roenicke said Tuesday that starting pitcher Eduardo Rodriguez and prospect Bobby Dalbec both tested positive for the coronavirus. Rodriguez has yet to report to camp after telling the team that he had been around relatives who had been ill. Dalbec, a 25-year-old third baseman, is also at home and is currently asymptomatic. Roenicke said that he intended to have Rodriguez start on opening day. ''Just unfortunate that we might not be able to still do it,'' Roenicke said. ''We'll have to wait and see.'' Rodriguez won a career-high 19 games with a career-low 3.81 ERA in 34 starts last year. ... The team's first intrasquad scrimmages are set for Thursday and Friday. Both are scheduled for 5 1/2 innings. ... Boston signed second baseman Nick Yorke, the club's top selection in June's first-year player draft.