Seager looks to be example for younger teammates in Seattle 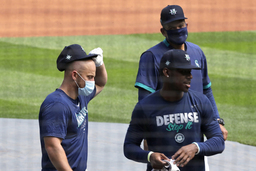 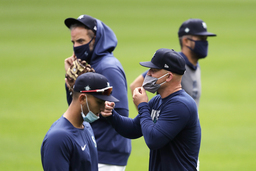 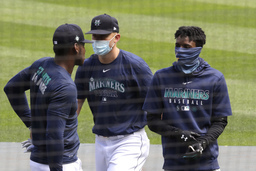 SEATTLE (AP) When the games start, Kyle Seager doesn’t intend to be wearing a mask all the time.

For now, in the early days of summer camp for the Seattle Mariners, the veteran third baseman has it on all the time. At the plate. In the field.

It’s not enjoyable. But for him it’s necessary. Both personally and to be an example.

On a rebuilding ball club with plenty of younger faces floating around that he doesn’t fully recognize yet, Seager is one of the few Mariners that needed to have an extensive conversation about how returning to baseball would affect his family at home.

He has three young kids. His son Crue has been a regular clubhouse fixture for years hanging out with his dad and teammates after games.

“He’s pretty upset about the no ice cream after games,” Seager said.

But coming back for the shortened 60-game season that begins on July 24 in Houston wasn’t a simple decision for Seager. It came after several discussions with his wife Julie and ultimately the decision to have the entire family join him in Seattle after spending the past few months in North Carolina.

“That’s real. It changes things with families, it changes things when you start thinking about something other than yourself. So those are those are real concerns,” Seager said. “Me and Julie talked about it you know kind of weighed the pros and cons. We had quite a few discussions about whether if I do play do they come up to Seattle, do they stay there, how do the arrangements and everything work. So those were those were all legit discussions and they’re legit concerns.”

While Seager’s primary job is being Seattle’s everyday third baseman and a holding down a spot in the middle of the batting order, he’s also been a voice in the socially-distant clubhouse of keeping the Mariners as healthy as possible. Manager Scott Servais noted that as safe as the team feels inside its bubble at T-Mobile Park, it’s how players and staff act away from the field that will likely determine if Seattle can avoid having the virus infiltrate the clubhouse.

“It’s something that a few of our veteran players are talking about a lot to their teammates, about how they need to take it serious because a lot of those veteran guys do have families already. And they still want to go home and see their kids and do those things,” Servais said.

When the truncated season does begin, Seager will be trying to rebound from two subpar seasons. He hit a career-low .221 in 2018 and last season started the year on the disabled list and was limited to 106 games. He still finished with 23 home runs, but hit only .239.

Several years ago, Seager built a batting cage in a barn on his property in North Carolina. He’s hoping the regular work during the layoff will lead to a fast start.

“I was able to get up in the mornings go get a full workout in,” Seager said. “I was able to hit, throw into the cage which isn’t as great as being on field obviously, but I was able to make do pretty good.”