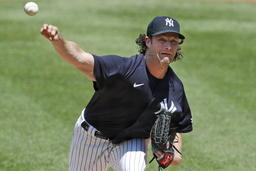 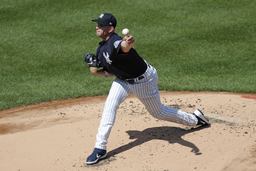 In this July 5, 2020, file photo, New York Yankees starting pitcher James Paxton throws from the mound during a baseball summer training camp workout at Yankee Stadium in New York. Nothing changes the New York Yankees' mission, not the novel coronavirus, not a 60-game regular season. Winning the World Series is the sole focus.(AP Photo/Kathy Willens, File) 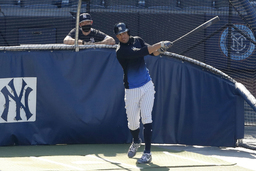 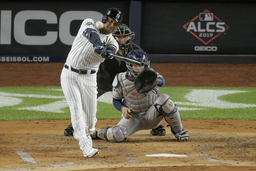 In this Oct. 18, 2019, file photo, New York Yankees' Aaron Hicks connects for a three-run home run against the Houston Astros during the first inning of Game 5 of baseball's American League Championship Series, in New York. Nothing changes the New York Yankees' mission, not the novel coronavirus, not a 60-game regular season. Winning the World Series is the sole focus. (AP Photo/Seth Wenig, File)

NEW YORK (AP) Nothing changes the New York Yankees’ quest, not the novel coronavirus, not the shortest schedule in their century-plus history.

"When you’re in the grind of the season and it’s challenging and it’s tough and you’re going through the monotony of all the protocols you’ve got to go through every day, who stays on top of that and handles that the best? I think there’s a competitive advantage to be gained there,” manager Aaron Boone said.

"Where there’s no fans in the stands and you’re getting used to how to find that gear or how to find that energy in a situation that you’re not used to, I think there’s a competitive advantage to gain that we have to take advantage of,” the third-year manager added.

Winning the World Series remains the sole focus for a team lacking success since its 27th title in 2009. New York expected to compete from the first pitch by new ace Gerrit Cole, just not while emerging from a socially distanced clubhouse to an empty Yankee Stadium.

“There’s obviously a lot of things that are different now than what I have grown accustomed to over the years,” said 36-year-old outfielder Brett Gardner, the last holdover from 2009. “It’s something that everybody has to deal with, not just everybody on our team, but all teams throughout the league. And I think that the better we can navigate those changes and deal with them and kind of look past that, I think the better off we’ll be as a team.”

New York may have benefited most from the delay in openers from March 26 to July 23. James Paxton (back surgery), Aaron Hicks (Tommy John surgery), Giancarlo Stanton (calf strain) and perhaps Aaron Judge (broken rib) have healed.

Cole, signed to a $324 million, nine-year contract, threw off a mound once a week during the hiatus, waiting for a chance to impress his new bosses and teammates.

“There’s kind of a fine balance of not trying to throw useless bullets, but also trying to maintain some of that stress so that you can keep the tissue activated and keep the body prepared to be able to ramp up really quickly,” the 29-year-old right-hander said.

Still, New York has issues. Closer Aroldis Chapman and second baseman DJ LeMahieu contracted COVID-19 and missed stretches of summer camp. Zack Britton would fill in for Chapman if needed and Tyler Wade could see time at second in place of LeMahieu.

New York has started slowly for most of the past two decades. The Yankees won more than six of their first 10 just once since 2003, going 7-3 in 2010.

“By definition the games are more important when they’re only 60, right? But, no, we’re not trying to go out and go 8-2,” Boone said. “We can’t go 8-2 on July 23rd. It’s who are we playing, what are we up against, what’s the game plan? And trying to go out and be our best. And hopefully over time, in this case a 60-game season, it’ll be good enough that we get to play for play for a championship.”

What happens in July, August and September figures to mean little -- unless New York fails to reach October.

Cole was signed to settle a rotation that includes Paxton, Masahiro Tanaka (slowed by a concussion on July 4), J.A. Happ and possibly Jordan Montgomery, back from Tommy John surgery in June 2018. Limited to three regular-season and two playoff appearances last year, Luis Severino is out for this season following Tommy John surgery on Feb. 27. Domingo Germán has 63 games left to serve in his suspension for violating Major League Baseball’s domestic violence policy.

RHP Deivi Garcia, a 21-year-old whose fastball has reached 95-97 mph, moved up from Class A Tampa to Double-A Trenton and Triple-A Scranton/Wilkes-Barre last year. He struck out 165 in 111 1/3 innings but walked 54. With no minor leagues this year, his opportunity to impress is limited to training. “I don’t think it’s going to hold me back or prevent me from making strides to progress in my career,” he said.

Chapman, Britton, Adam Ottavino, Chad Green and Tommy Kahnle are back from the only bullpen in which no reliever pitched three days in a row during the 2019 regular season.