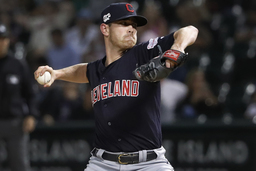 In this Sept. 25, 2019, file photo, Cleveland Indians starting pitcher Shane Bieber delivers during the first inning of the team's baseball game against the Chicago White Sox in Chicago. With the schedule slashed 102 games because of the COVID-19 pandemic, the Indians will take off on a 60-game summer sprint they could win as easily as anyone. Cleveland's got the arms, enough bats, and in Terry Francona, perhaps the perfect manager to motivate and navigate his players this odd-ball season. (AP Photo/Charles Rex Arbogast, File)

CLEVELAND (AP) This could have been Cleveland's year. Maybe it can be anyway.

Under normal circumstances, with their strong starting rotation, star-filled infield, postseason experience and one of baseball's best managers, the Indians figured to have a solid chance at ending their 71-year-old World Series title drought - baseball's longest - in 2020.

In this new, changing-by-the-moment world, it may be their last, best chance for a while.

With the schedule slashed 102 games because of the COVID-19 pandemic, the Indians will take off on a 60-game summer sprint they could win as easily as anyone. Cleveland's got the arms, enough bats, and in Terry Francona, perhaps the perfect manager to motivate and navigate his players through this oddball season.

For Francona, nothing has changed. Sure, he'll have to manage behind a mask, and that will be less problematic since he's kicked his voracious bubble-gum chewing habit. When the season finally opens July 24 after a three-month delay, there will be a sense of urgency like never before.

“We start, and everything you do counts,” he said following a toasty, July morning workout at Progressive Field. “I mean, 50 years from now when somebody looks on the back of somebody’s baseball card, they’re not gonna care that we had some damn virus that they probably never even heard of. This is baseball.”

The Indians missed the playoffs for the first time since 2015 last season, finishing eight games behind the Minnesota Twins, who unseated Cleveland as AL Central champion. Injuries and inconsistency plagued the Indians in 2019, and a late push for the postseason stalled when third baseman Jose Ramirez broke his hand in late August and needed surgery.

Whether this season started in March or July, All-Star shortstop Francisco Lindor's future was going to hang over the club. The 26-year-old has grown into one of the game's best all-around players, a once-in-a-decade talent who can affect the game in numerous ways.

Lindor is only signed through 2021 and he's rejected several long-term contract offers from the cash-conscious Indians, who can't break their bank and overpay him. The dilemma for Cleveland's front office is whether to hang on to Lindor until he becomes a free agent and try to win a Series title or trade him for top prospects.

The pandemic has added a layer of intrigue to Lindor's complicated situation, and it has heightened the sense of urgency to win.

If the season does happen, one team will be crowned a champion. And while an asterisk might be added, the Indians would gladly have their name next to it.

“If you do it the right way, 60 games is going to mean more than another World Series I know about,” said right-hander Mike Clevinger, who has been outspoken about Houston's 2017 title, somewhat tainted by the Astros' cheating. "This is my opinion, it’s going to be some of the most exciting baseball you’ve seen. You’ve got a 60-game race to the end. Everybody’s in it.

“This is going to be the time to watch baseball. It’s going to get people back into it.”

Shane Bieber has moved into that spot.

Last year's All-Star Game MVP, the 25-year-old Bieber is already drawing comparisons to Kluber because of his consistency, work ethic and unflappable demeanor.

“I catch myself saying a lot of the things I said about Kluber seven years ago,” Francona said in praising Bieber, who went 15-8 with a 3.28 ERA in 2019. “And that’s a very big compliment to anybody.”

Perhaps one of the benefits of the condensed scheduled is that the Indians will play the majority of it against AL Central opponents.

The Indians will face the Twins, White Sox, Tigers and Royals 10 times each and their furthest trip will be to Minneapolis. Cleveland went 48-28 inside the Central a year ago - 18-1 against Detroit - and is 145-83 over the past three seasons.

Francona's lineup will be one of baseball's most flexible. His entire starting infield - Lindor, Ramirez, second baseman Cesar Hernandez and first baseman Carlos Santana -- are all switch-hitters, giving Francona the luxury to get favorable matchups against right- or left-handers.

Lindor, who has been so productive from the leadoff spot, might hit third this season.

The Indians are considering a new identity following the move by the NFL's Washington Redskins to drop their offensive name. Cleveland's team has been the Indians since 1915. They removed the contentious Chief Wahoo logo from their game caps and jerseys two years ago, and it might be time for a complete re-branding by the franchise.