Yanks' Tanaka unsure whether he can take 1st rotation turn 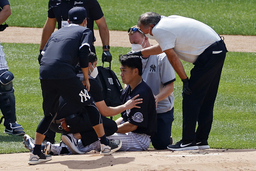 New York Yankees pitcher Masahiro Tanaka is tended to by team medical personnel after being hit by a ball off the bat of Yankees Giancarlo Stanton during a baseball a workout at Yankee Stadium in New York, Saturday, July 4, 2020. (AP Photo/Adam Hunger)

NEW YORK (AP) Yankees pitcher Masahiro Tanaka is unsure whether he will be able to take his first turn through the rotation as he recovers from a line drive off his head.

Tanaka was hit on the right side near the temple by Giancarlo Stanton's shot during batting practice on July 4. While the 31-year-old right-hander says he has no concussion symptoms, he has not thrown off a mound since.

New York opens the season July 23 at Washington, and Tanaka is projected as part of a rotation behind new ace Gerrit Cole, joined by James Paxton, J.A. Happ and perhaps Jordan Montgomery. He still hopes to avoid missing any starts.

''I want to be optimistic and say yes,'' Tanaka said Tuesday through a translator. ''But obviously the injury is at the head, so I think it's something that I need to be cautious about and kind of take it careful, more so than other injuries.''

Right fielder Aaron Judge was close to returning to intrasquad games following a stiff neck that sidelined him since late last week.

Tanaka was taken to a hospital for a CT scan after he was hit. New York put Tanaka through the concussion protocol but he said he has not felt any symptoms.

''Obviously, we're taking things a little bit more carefully now. But the good thing is that I'm feeling fine right now,'' Tanaka said. ''I feel very lucky because, it could have been something that's much worse.''

He doesn't think he will fear being hit again.

''I think everything will be OK once I step on the mound,'' Tanaka said. ''But you really don't know until you face a live hitter and at that point in time, you might feel some worries or concern going up on the mound. But as of now, I feel OK getting back on the mound.''

Tanaka is 75-43 with a 3.75 ERA in six seasons with the Yankees and is entering the final season of a seven-year contract.

After spring training was stopped by the pandemic on March, Tanaka initially remained near the Yankees' spring training complex in Florida, then returned with his family to Japan. He did not detail whether his decision was tied to allegations of threats against Asians in the U.S. but did say he was ''considering what was best for the family.''

''Obviously, there were some incidents but someone had to make a decision of what we were going to do,'' he said.