Cubs 1B Anthony Rizzo dealing with back trouble 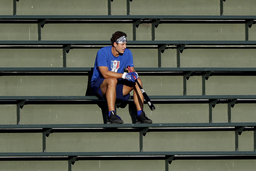 CHICAGO (AP) Anthony Rizzo's back trouble flared up again after he took batting practice over the weekend, and the Chicago Cubs are sending the slugger for tests.

Rizzo has been dealing with back tightness during summer camp, a recurring problem throughout his career. The first baseman took live BP on Sunday before the issue surfaced again.

''After his live BP the other day, once he cooled down, a little bit of that stiffness came back,'' manager David Ross said Tuesday on a video conference call. ''So he's still day to day, trying to get some tests run and see where he's at.''

Any prolonged absence for Rizzo would be a big blow for the Cubs, who open the season on July 24 against Milwaukee. The three-time All-Star, who is expected to bat second in the order, hit .293 with 27 homers and 94 RBIs last year.

Ross was back with the team after he watched Monday morning's workout from a rooftop across the street from Wrigley Field. Ross was awaiting his completed result from his Saturday coronavirus test.

''It was nice. I mean I got a nice seat over there,'' Ross said. ''I got to watch the practice. The energy was good. I could hear the guys.''