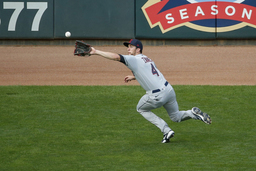 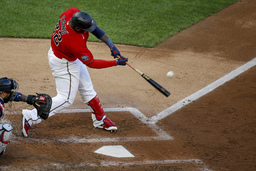 Minnesota Twins' Miguel Sano hits a solo home run against the Cleveland Indians during the fifth inning of a baseball game Saturday, Aug. 1, 2020, in Minneapolis, his second solo homer of the night. (AP Photo/Bruce Kluckhohn) 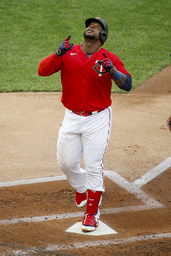 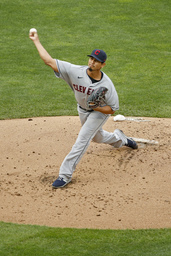 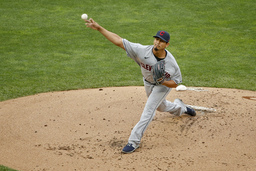 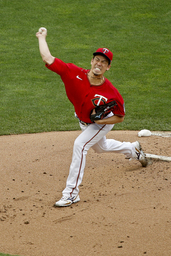 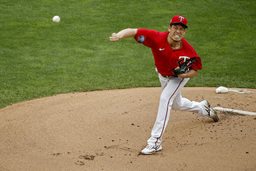 MINNEAPOLIS (AP) Miguel Sano hit a pair of homers and Kenta Maeda pitched six scoreless innings in his home debut for Minnesota as the Twins beat the Cleveland Indians 3-0 on Saturday.

Eddie Rosario added a solo homer for Minnesota, which got another strong start from a veteran newcomer to its starting rotation. Maeda (2-0) retired 13 of the first 14 batters he faced and didn't allow a hit until Bradley Zimmer beat out a weak ground ball to second base in the fifth inning.

''I think we are gonna get those types of performances from Kenta, and that type of preparation, execution, regardless of who we're playing,'' Twins manager Rocco Baldelli said. ''Knowing that Kenta's gonna see these guys a lot, and watching him go out there and his initial visual was very, very impressive.''

Carlos Carrasco (1-1) gave up six hits in six innings for Cleveland and was done in by three solo home runs from the Twins.

''This season is completely different,'' said Carrasco, who recovered from chronic myeloid leukemia last season. ''Last year, I went one inning and the second inning I felt tired. Now I feel strong from the first inning to the last inning.''

Maeda, acquired in an offseason trade from the Dodgers that sent prospect Brusdar Graterol to Los Angeles, was one of three key additions to strengthen Minnesota's rotation along with Rich Hill and Homer Bailey. Maeda, Hill and Bailey have combined for 21 innings in four starts this season, surrendering just four runs.

Maeda has allowed two runs in 11 innings in his two starts. The Zimmer infield single was the only hit he allowed on Saturday. His softer mix of changeups and sliders had the Indians batters off-balance, while he could be heard grunting from the mound with no fans in the stands for his home debut.

Trevor May, Cody Stashak and Taylor Rogers finished off the second shutout for Minnesota this season, with Rogers securing his third save.

Meanwhile, the Indians have scored three runs in their past four games.

''It doesn't matter the length of the season,'' manager Terry Francona said. ''We're in August now and that's how you treat it. We've got to kind of sprint to the finish. We're trying to get games under our belts quickly so guys get comfortable.''

Sano entered the game with one hit in 17 at-bats, a slow start after recovering from COVID-19 during summer camp. He connected on a line drive homer that reached the back of the bullpens in center field during the third and added his second of the game in the fifth, hooking another line drive inside of the left-field foul pole.

Cleveland announced that it has traded RHP James Hoyt to the Miami Marlins in exchange for cash. Hoyt was designated for assignment on July 28.

Indians: OF Tyler Naquin (hairline fracture of right big toe) ran the bases at the team's alternate training site and is scheduled to participate in simulation games as early as Monday. C Roberto Perez (right shoulder strain) has increased the strengthening exercises for his shoulder and Francona said Perez is ''about three or four days away from throwing.''

Twins: 3B Josh Donaldson was out of the lineup after leaving Friday's game with right calf tightness. Baldelli said Donaldson is still considered day to day and is undergoing treatment, but the team would hold him out until ''he's back and ready to go 100 percent.'' . RHP Zack Littell was placed on the 10-day injured list with a left hamstring strain. Baldelli termed it a ''minor incident.'' Littell has allowed four runs in three innings over two appearances this season. The move is retroactive to July 31 and RHP Jorge Alcala was recalled from the team's alternate training site.

Bailey was scheduled to start Sunday's series finale, but Baldelli said Bailey will be pushed back to Monday against Pittsburgh and Minnesota will use reliever Tyler Clippard (0-0, 2.25 ERA) as an opener. Cleveland counters with RHP Aaron Civale (1-0, 3.00). Civale gave up two runs in six innings and struck out nine batters in beating the White Sox in his first start of the season.