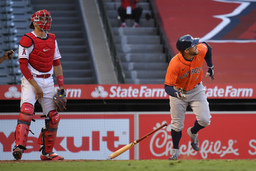 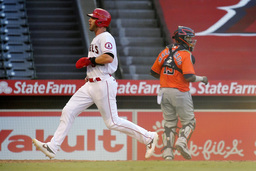 ANAHEIM, Calif. (AP) Hansel Robles gave up a go-ahead homer to George Springer with two outs in the ninth, and the Los Angeles Angels looked crushed. Their leaky bullpen had blown another late lead and put them on course for another discouraging loss.

For the first time in this short season, the Angels responded to their relievers' woes with some clutch offense of their own.

And they even did it twice.

Matt Thaiss scored on Michael Hermosillo's bases-loaded sacrifice fly in the 10th inning, and the Angels snapped their three-game skid with a 5-4 victory over the Astros on Saturday night.

When Robles gave up homers to Josh Reddick and Springer in the ninth, the Angels had ample reason to lose their focus and faith. Manager Joe Maddon saw none of it.

''We've been through this several times already this season,'' Maddon said. ''We're very close to being in great shape, and (then) we're just in mediocre shape. We've just got to nail those wins down. ... Hopefully this will energize us a bit going into tomorrow.''

The Angels did it by manufacturing two late runs against the Astros, whose own relief woes are mostly centered around health. Those worries are even worse after closer Roberto Osuna left abruptly in the ninth with an apparent arm injury.

''It's scary,'' Springer said of Osuna's departure. ''This is a league-wide thing. I think you're seeing a lot of guys throughout the league start to get injured, a lot of pitchers. It's scary, especially when it hits home. Osuna has been an absolute anchor for us.''

Los Angeles lead 3-1 entering the ninth, but Robles had another discouraging outing. The Angels' closer gave up two homers and the first hit of the season by backup catcher Garrett Stubbs, who kept the game alive for Springer.

''That's what we'd been waiting on, some guys to hit the ball out of the ballpark,'' Astros manager Dusty Baker said. ''We left a lot of runners on base and we finally cashed in some.''

But Luis Rengifo got a one-out single in the bottom of the ninth off Osuna, who then had to leave the game. Cy Sneed was rushed in from the bullpen, and former Astros catcher Castro drove the tying double off the top of the wall in deepest center field.

The Angels' bullpen finally came through in the 10th. Noe Ramirez got two outs, and Ryan Buchter (2-0) struck out Abraham Toro with the bases loaded.

David Fletcher then hit a leadoff single in the 10th off Nivaldo Rodriguez (0-1), sending Thaiss to third. After the Astros walked Anthony Rendon to load the bases, Thaiss scored on Reddick's inaccurate throw from medium right field.

''I just happened to be in a good situation to put the ball in play and make them try to make a play,'' Hermosillo said. ''Being in a pressure situation is awesome.''

With Angel Stadium's typical late-afternoon shadows creating visual obstacles between the pitcher's mound and the plate, Greinke retired the Angels' first 16 hitters on 65 pitches in a bid for the first perfect game of his 17-year major league career. He didn't get out of the sixth inning: Taylor Ward broke up Greinke's no-hitter with a clean single and scored the Angels' first run right before Greinke was chased.

Ward also tripled and scored in the eighth on Rendon's infield single.

Canning pitched six-hit ball into the seventh inning and struck out five before Springer drove in the Astros' first run with an RBI single in the seventh.

The Angels played their third straight game without Mike Trout, whose first child was born Thursday. The three-time AL MVP is expected to return to the Halos' lineup soon, manager Joe Maddon said.

Astros: Osuna is headed back to Houston for an MRI exam. ... OF Michael Brantley was held out of the starting lineup with a sore leg. He stepped on Dodgers reliever Joe Kelly's foot last Tuesday. Brantley struck out as a pinch-hitter in the seventh.

Angels: 2B Tommy La Stella wasn't in the starting lineup due to neck stiffness. Rengifo replaced him and went 2 for 4.

Shohei Ohtani returns to the mound after a disastrous season debut last Sunday in which the Angels' two-way star couldn't record an out in Oakland. He faces Josh James (0-0, 9.00 ERA), who gave up three runs in three innings in his season debut against Seattle.