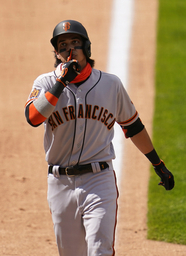 San Francisco Giants' Mauricio Dubon reacts at he reaches home plate after hitting a three-run home run in the seventh inning of a baseball game against the Colorado Rockies, Thursday, Aug. 6, 2020, in Denver. (AP Photo/Jack Dempsey) 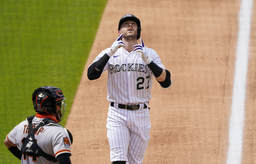 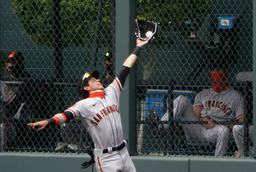 San Francisco Giants shortstop Mauricio Dubon catches a fly ball at the wall off the bat of Colorado Rockies' Matt Kemp during the second inning of a baseball game Thursday, Aug. 6, 2020, in Denver. (AP Photo/Jack Dempsey) 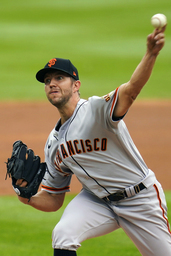 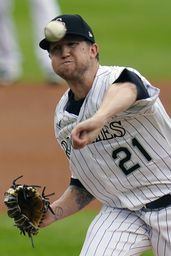 DENVER (AP) Daniel Murphy hit a two-run, pinch-homer during a five-run seventh inning to lead the Colorado Rockies over the San Francisco Giants 6-4 on Thursday.

Anderson was Colorado's first-round pick in 2011 and was a starter for four seasons. He went 0-3 with an 11.76 ERA in 2019 before surgery in June ended his season. The Giants picked him up off waivers in October, and Thursday was his second start in four games for them.

In a battle with Rockies starter and fellow lefty Kyle Freeland, he threw five shutout innings, struck out three and gave up two hits, both singles. He left after 66 pitches.

''There was really no way he was going to go beyond 60-65 pitches,'' Giants manager Gabe Kapler said. ''It was an excellent performance by T.A. He did everything we could've possibly asked of him. He executed his changeup and fastball and located both pitches. You saw the results. It was an excellent outing.''

Story's one-out home run off Wandy Peralta in the sixth gave Colorado a 1-0 lead, beginning a surge of runs. Mauricio Dubon hit a three-run homer off Freeland with two outs in the seventh to put the Giants ahead.

''I'm disappointed I gave up the three-run shot that gave them the lead. I can't be too upset about it,'' Freeland said. ''I put the pitch where I wanted to put it, he was just ready for it. He guessed right and I guessed wrong.''

Doubles by Garrett Hampson and Chris Owings and Murphy's home run - his second - leading off the bottom half on the seventh put the Rockies back in front.

''My job there is, at the worst, is to get Owings, C.O., to third base with less than two outs,'' Murphy said. ''Fortunately I was able to do more than that. I got one in the middle of the plate and was able to get it up in the air and get it going.''

David Dahl singled and Blackmon hit his second homer of the season into the second deck in right off of Caleb Baragar to give Colorado a three-run lead.

Jairo Diaz got the last four outs for his third save in three chances, and Yency Almonte (1-0) allowed a run in an inning of relief.

Dubon turned and screamed into the Giants dugout after hitting his homer, drawing some stares from the Rockies bench, including Murphy.

''I had a lot of emotion, knowing where I came from, knowing the start of the year and not playing every day right now,'' Dubon said. ''Then not having a good first two at-bats and then finally breaking through like that, it was pretty emotional. I enjoyed it. ... It is what it is. ... I respect him a lot.''

Kapler was happy his player showed some emotion.

''I think there's room in the game for guys who are kind of quiet assassins who put heads down and run around the bases, like Matt Williams did,'' he said. ''There's plenty of room for players who get really excited, as long as that emotion, excitement is directed to our dugout and not theirs, I'm in support of our players expressing themselves.''

Teams were required to trim their rosters from 30 to 28 on Thursday, and the Giants placed lefty Andrew Suarez and outfielder Steven Duggar on their taxi squads. Colorado optioned infielder Josh Fuentes and right-hander Ashton Goudeau to its alternative training site at Metro State University in Denver.

Giants: RHP Jeff Samardzija (0-1, 9.31 ERA) starts the first of a three-game series at the Los Angeles Dodgers on Friday night. Kapler has not announced a starter for the first game.