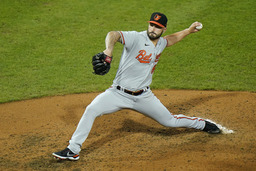 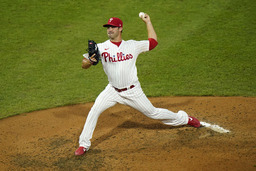 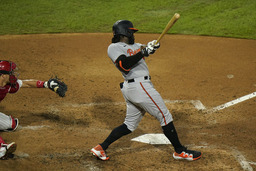 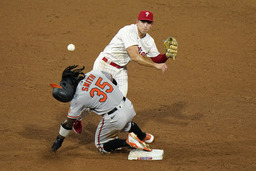 Philadelphia Phillies' second baseman Scott Kingery, top, throws to first after forcing out Baltimore Orioles' Dwight Smith Jr. at second on a fielder's choice by Austin Hays during the sixth inning of a baseball game, Tuesday, Aug. 11, 2020, in Philadelphia. Hays was safe at first on the play. (AP Photo/Matt Slocum) 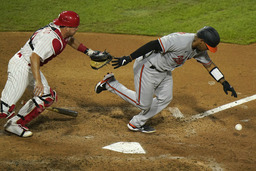 Baltimore Orioles' Pedro Severino, right, tries to out run a ground out against Philadelphia Phillies catcher J.T. Realmuto during the sixth inning of a baseball game, Tuesday, Aug. 11, 2020, in Philadelphia. (AP Photo/Matt Slocum) 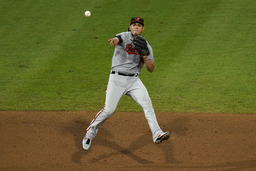 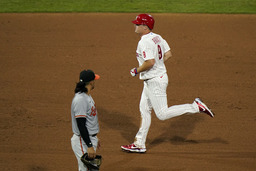 PHILADELPHIA (AP) A wacky game had a wild finish.

Austin Hays led off the 10th inning with a two-run, inside-the-park homer to lift the Baltimore Orioles to a 10-9 win over the Philadelphia Phillies on Tuesday night.

Bryce Harper hit a tying, two-run homer in the eighth and Jean Segura gave the Phillies a 6-5 lead with a solo shot two outs later. But closer Hector Neris couldn't hold it.

After Orioles closer Cole Sulser (1-1) allowed a two-run single to Didi Gregorius with two outs in the ninth to tie it at 8, Hays put Baltimore ahead to stay.

With a runner on second to start the extra inning because of new rules, Hays ripped a sinking liner to center off Deolis Guerra (1-2). Roman Quinn dove headfirst and the ball skipped to the warning track. Quinn fell picking it up and Hays circled the bases.

''I actually didn't think he had a chance to catch it when I first hit it,'' Hays said. ''I thought it was going to be a one-hop line drive to him. And I saw him start to lay out, I thought he was going to catch it. He almost did. ... I saw the ball go by him and it was just off to the races. I was sniffing an inside-the-parker the whole way.''

Paul Fry allowed an RBI single to Jay Bruce in the 10th but retired Quinn on a bouncer to shortstop with runners on second and third for the second out. Travis Lakins Sr. entered and got Rhys Hoskins on a grounder to a shifted second baseman, earning his first career save.

''I think that game had a little bit of everything,'' Orioles manager Brandon Hyde said. ''I just told (Alex) Cobb he did a great job; seems like about five hours ago that he pitched. It was just a gutsy performance by our club. A real grind-out mentality. Just a great team win. A persevering, gutsy, grind-out team win.''

The Orioles went ahead 8-6 in the ninth on an unusual play. After Renato Nunez lined an RBI single to to make it 6-6, Neris nearly escaped a bases-loaded jam when Pedro Severino lifted a 2-0 pitch with two outs toward the first-base side of the mound. Segura charged in from third base, called off first baseman Hoskins late and stumbled crossing over the mound as the ball dropped in and two runs scored.

Hoskins said he deferred to Segura because of ''pop-up priority'' but also took the blame.

Phillies starter Zack Wheeler cruised into the sixth before running into trouble. He allowed three runs and eight hits in 5 2/3 innings.

''That was a game in a lot of ways we gave away,'' Phillies manager Joe Girardi said.

The Phillies selected the contracts of RHP Connor Brogdon and RHP Blake Parker. RHP Nick Pivetta was optioned to Triple-A Lehigh Valley, while RHP Trevor Kelley and OF Nick Williams were designated for assignment.

Orioles: LH John Means came off the bereavement list and was headed back to Baltimore. He will go on the injured list until completing health and safety protocols.

Phillies: RHP David Robertson and LHP Ranger Suarez are joining the team in Philadelphia after working out at the team's complex in Clearwater, Florida. They'll throw for pitching coach Bryan Price and then go to the team's alternate training site to continue rehab. Robertson, a former closer, is returning from Tommy John surgery. Suarez tested positive for COVID-19 before the season.

Plate umpire Pat Hoberg was hit on his left hand by the barrel of a shattered bat in the second inning. He stayed in the inning after a trainer attended to him for several minutes.

LH Wade LeBlanc (0-1, 6.91 ERA) makes his fourth start of the season for the Orioles on Wednesday night and RHP Zach Eflin (0-0, 0.00) goes for the Phillies. LeBlanc is 2-2 lifetime against Philadelphia, but hasn't faced the Phillies since throwing two hitless innings in relief for Pittsburgh on July 3, 2017. Eflin won his only career start against Baltimore, giving up two runs in seven innings on July 3, 2018.