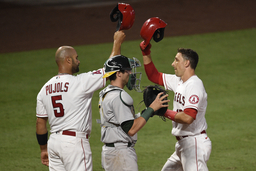 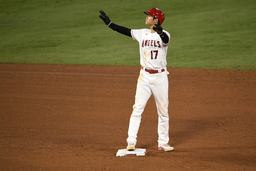 Los Angeles Angels designated hitter Shohei Ohtani waves to the dugout after arriving at second base off a single by Albert Pujols during the fourth inning of a baseball game against the Oakland Athletics in Anaheim, Calif., Tuesday, Aug. 11, 2020. (AP Photo/Kelvin Kuo) 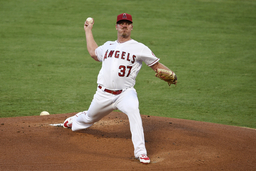 Anthony Rendon, Castro and Brian Goodwin homered in the fourth off Mike Fiers (1-1), and David Fletcher homered in the sixth inning to give the Angels back-to-back home games with at least four homers for the first time in franchise history.

That was more than enough offense for Bundy (3-1), who struck out 10 with one walk while dropping his ERA to 1.57 over a major league-leading 28 2/3 innings. The right-hander has been mostly fantastic in four starts since the Angels acquired him from Baltimore for four minor leaguers last December.

''I'm feeling pretty good, as good as I can right now,'' Bundy said. ''If you're throwing the ball good, the confidence is high. You just try to stay in the middle and not get too high, not get too low.''

Bundy has thrown 12 consecutive scoreless innings, and he has yielded only nine hits and two walks against 25 strikeouts in his last 20 innings. He threw the Angels' first complete game since June 2018 last week in Seattle, and he followed up with a second straight 10-strikeout game against the A's superior lineup.

''It's the real deal,'' Angels manager Joe Maddon said of Bundy's stuff, which is highlighted by a wicked slider and an improved changeup. ''The pitches are good, the swings are not sharp and the takes are bad. Everything he's doing right now, I don't know the last time he's pitched this well. It's just interesting to watch. He's set the bar really high.''

Fiers yielded seven hits and five runs while failing to get out of the fourth inning for the AL West-leading A's, who have lost two straight since arriving in Anaheim with a nine-game winning streak.

''I would say it's top three in baseball,'' Fiers said of the Angels' lineup. ''It's definitely scary. Guys at the top just get on base. They find ways on for the big guys, (Mike) Trout, (Shohei) Ohtani and Rendon. It's a very tough lineup.''

Rendon's 408-foot solo shot to the bullpens beyond the left field fence got the Angels' offense started. The Halos' new $245 million third baseman is finally heating up with homers in consecutive games.

After Ohtani and Albert Pujols singled, Castro - the Angels' new catcher and an East Bay native - brought them home with his second homer of the season off the fake rock pile beyond center field.

Ohtani went 2 for 4 with a walk and a stolen base. The two-way star has six hits and three walks in his last three games, and he's batting .318 with two homers, four walks and five runs in the week since he strained his right forearm and returned to a full-time designated hitter role for the rest of the season.

The A's were playing for the 12th consecutive day and for the 18th day out of 19 since the regular season began. Weariness isn't an excuse, they say.

''We knew what kind of season we're getting ourselves into when we started,'' left fielder Robbie Grossman said. ''We're all up for the challenge, and we're looking forward to come back tomorrow.''

The Angels' lineup is finally clicking after hitting miserably during LA's 5-11 start. Trout's two homers led the Angels' four-homer barrage in the series opener Monday, and the Angels followed up by hitting at least four homers in back-to-back games for the fifth time in franchise history.

Ramon Laureano went 1 for 3 with two strikeouts for the A's after appealing his six-game suspension handed down Tuesday for his role in Oakland's fight with the Astros last weekend.

Angels RF Jo Adell got the day off, but Maddon personally put the 21-year-old rookie through a rigorous outfield workout before Tuesday's game. ... SS Andrelton Simmons went through a full workout Monday for the first time since spraining his ankle. Maddon doesn't know when he'll be back.

Griffin Canning (0-2, 3.14 ERA) takes the mound for Los Angeles in the series finale against Chris Bassitt (1-0, 1.08 ERA). Canning hasn't been rewarded despite allowing only five earned runs in his three starts, while Bassitt has allowed one run or fewer in all three of his starts.