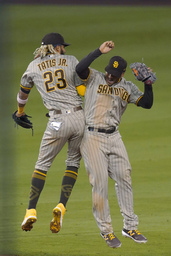 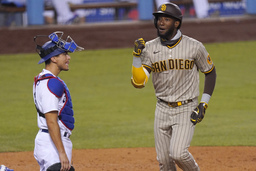 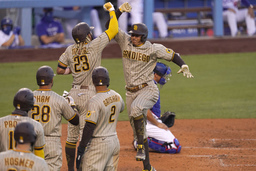 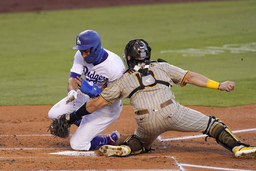 Los Angeles Dodgers' Chris Taylor, left, collides with San Diego Padres catcher Austin Hedges as he is tagged out while trying to score on a double by Kik Hernndez during the second inning of a baseball game Tuesday, Aug. 11, 2020, in Los Angeles. (AP Photo/Mark J. Terrill)

The Padres have taken the first two games of the series after dropping two of three to the Dodgers last week in San Diego, and have won a season-best three in a row overall.

''We're just trying to be the best team when we step out on the field every single day,'' Machado said. ''Whether it was the Dodgers, Colorado, San Fran, Arizona. Just go out there and play our best game. Try to be the best Padre team out there on the field. If we can do that, we can play some very good baseball.''

Richards (1-1) won his first game since July 4, 2018, shortly before having Tommy John surgery that delayed his readiness for the 2019 season. The right-hander allowed one run and six hits in six innings. He struck out three and walked two.

Drew Pomeranz got the final out to earn his fourth save.

Machado's 10th career slam came off Ross Stripling (3-1) not long after the Padres acquired his brother-in-law, first baseman Yonder Alonso from Atlanta. Alonso returns to San Diego, where he played from 2012-15 and Machado and Alonso's sister make their offseason home.

''I'm definitely excited to have my brother-in-law finally on the same team,'' Machado said.

Jake Cronenworth doubled leading off the third. Austin Hedges laid down a sacrifice bunt and Stripling's throw was too high for 6-foot-5 Cody Bellinger at first, allowing Cronenworth to score on the pitcher's error. Profar followed with a sacrifice bunt picked up by third baseman Justin Turner, whose throw pulled Bellinger off the bag. The Dodgers had committed four errors this season until two in a row in the inning.

''It just stinks that inning got away from us,'' Stipling said. ''Shot-putting a ball over Cody when I had a chance for a free out. I clawed it and had all the time in the world and felt a little rushed when I didn't have a good grip on it.''

Fernando Tatis Jr. showed bunt before rifling a single to load the bases and extend his hitting streak to nine games. Trent Grisham grounded into a fielder's choice to third and Hedges was out at the plate. That set up Machado's blast and gave the Padres a 5-1 lead.

''He's starting to find the sweet part of the bat a little bit,'' Padres manager Jayce Tingler said. ''Being able to go dead center right there and drive the ball to the middle part of the field, that's usually a good sign of good things to come as well. There was a lot of energy in the dugout after that.''

The Dodgers' offensive woes continued, best illustrated by Bellinger. He bounced into two double plays that ended innings. Then fouled a ball off his right foot and fell down in the sixth before a flyout to left. The current NL MVP was 5 for 36 at the plate in July and is 7 for 36 this month. His .176 average is the lowest in the starting lineup.

''You have to drown that noise, that batting average out of your head,'' Dodgers manager Dave Roberts said. ''Each team is pitching him different, these guys were trying to crowd him. He's battling, he's grinding. There are some balls that he squared up that just seemed to be at 'em balls. It's going to come.''

Stripling gave up six runs and six hits in 4 2/3 innings of his first loss of the season. He struck out four and walked two.

Dodgers: SS Corey Seager completed baseball activities for the second straight day. He's been sidelined for nearly a week because of lower back discomfort. ''It's going to be a slow progression,'' Roberts said. The team is still considering putting him on the IL, but hasn't made a decision yet.

Alonso was on the Braves' restricted list after not reporting to their alternate training site. He will report to the Padres' alternate site at the University of San Diego. The Padres will send cash to the Braves to complete the deal.

Turner notched his 1,000th career base hit with a double off the wall in left leading off the second. He signaled to ask for the ball to be saved. He's the first Dodger to reach that mark since Machado did so while with Los Angeles on Aug. 9, 2018. Turner is 16 RBI from reaching 500 for his career.

Dodgers: RHP Tony Gonsolin (0-0) makes his second spot start of the season in place of LHP Julio Urias, who was pushed back to Thursday to give him an extra day of rest.