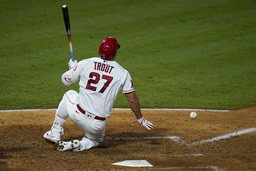 Los Angeles Angels' Mike Trout tumbles after he was hit by a foul ball during the seventh inning of a baseball game against the Los Angeles Dodgers, Friday, Aug. 14, 2020, in Anaheim, Calif. (AP Photo/Jae C. Hong) 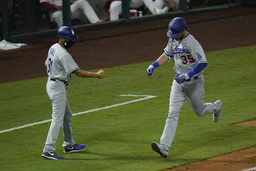 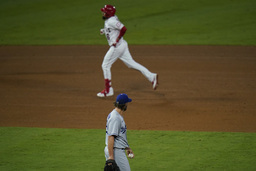 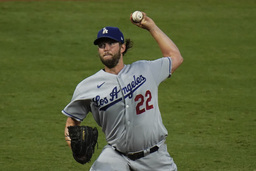 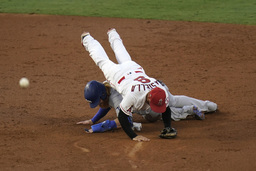 ANAHEIM, Calif. (AP) Instead of staying in a nearby hotel, the Los Angeles Dodgers are driving the 32 miles back and forth to Angel Stadium for the Freeway Series this weekend in another concession to the coronavirus-shortened season.

Clayton Kershaw and Cody Bellinger kept the Dodgers in the driver's seat in the series opener of this rivalry between two franchises currently motoring in opposite directions.

Kershaw allowed one hit over seven brilliant innings and Bellinger hit a pair of two-run homers in the Dodgers' 7-4 victory over the Los Angeles Angels on Friday night.

Justin Turner had two hits and drove in a run as the surging Dodgers opened this star-studded annual interleague series with their first win over the slumping Angels since 2018. The Dodgers (14-7) also moved back into sole possession of first place in the NL West with their third straight victory.

''I think three games in a row, a lot of good things (have happened),'' Dodgers manager Dave Roberts said. ''For me, it was the little things. ... It was a really well-played baseball game.''

Anthony Rendon homered in his fourth consecutive game for the Angels. Rendon also drew two walks from Kershaw (2-1), but he was the only Angels hitter to reach base against the Dodgers' longtime ace.

''I'll get Rendon out one of these days, I guess,'' said Kershaw, who gave up back-to-back homers to Rendon and Juan Soto to tie the decisive Game 5 of the Washington Nationals' NL division series victory over the powerhouse Dodgers last fall. ''Other than that, it was a good night.''

Kershaw struck out six and improved to 7-2 in his career against the Angels while decreasing his interleague ERA to 2.23 - the lowest in major league history among pitchers with at least 15 starts.

''His velocity was up from what I've seen in the recent past, and he was really uncanny with his slider,'' Angels manager Joe Maddon said. ''He got a lot of ground balls, and they made the plays. He kept the ball down.''

Kershaw also retired Mike Trout three times, dropping the three-time AL MVP to 2 for 16 in his career against the left-hander, including a current 0-for-14 skid since 2014.

Bellinger, the other reigning league MVP in this matchup, broke out of a season-long slump with his 12th career multi-homer game, connecting in the sixth and eighth innings. Bellinger headed to Anaheim in a 4-for-26 slump, and he hadn't homered since Aug. 3.

''I couldn't tell you the size of the monkey, but I'd say a decent-sized monkey,'' Bellinger said. ''I think we're all adjusting to the shortened season, some more (quickly) than others. I think we're eventually all going to be all right.''

Tommy La Stella had a two-run single in the eighth for the Angels, who have lost five of seven.

No fans were on hand for this perpetually well-attended series between two big-budget franchises with a combined five former league MVPs in their lineups alongside a wealth of young talent. That's where the similarities end: The Dodgers have won seven straight NL West titles, while the Angels have posted four straight losing seasons.

Patrick Sandoval (0-2) yielded six hits and pitched into the seventh inning for the first time in his career, but remained winless in 12 career major league starts for the Angels.

Kershaw faced the minimum 12 Angels through four innings, but Rendon led off the fifth with a homer into the short left field porch. The $245 million free agent's slow start at the plate has been counterbalanced by his solid on-base percentage and now his homer streak, the longest by an Angels third baseman since Jack Howell in 1987.

Bellinger's first homer put the Dodgers up 4-1 in the sixth. Edwin Rios doubled and scored on Corey Seager's groundout in the seventh.

Bellinger connected again off Ryan Buchter in the eighth.

This series is the first meeting between the clubs since Mookie Betts joined the Dodgers and agreed to a contract that will keep him playing in the same area as Trout for at least the next decade. Betts and Trout both went 0 for 4 in the opener.

La Stella ended the Dodgers bullpen's streak of 21 1/3 consecutive scoreless innings, but Dylan Floro got Trout to fly out with two runners on, ending the eighth-inning rally.

Shohei Ohtani doubled and scored on pinch-hitter Brian Goodwin's two-out double in the ninth. The Dodgers were forced to use closer Kenley Jansen, who struck out Jason Castro for his fifth save.

Dodgers: C Will Smith sees mild improvement in his stiff neck, but still missed his second straight game. He could be headed to the injured list, manager Dave Roberts said. Smith initially got hurt last week in San Diego.