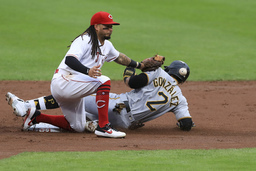 Cincinnati Reds' Freddy Galvis (3) attempts to field the ball as Pittsburgh Pirates' Erik Gonzalez (2) is safe after hitting a double in the second inning during a baseball game at in Cincinnati, Friday, Aug. 14, 2020. (AP Photo/Aaron Doster) 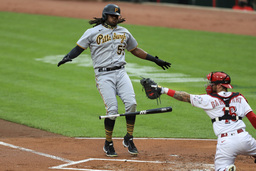 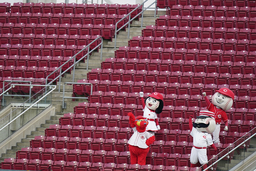 Cincinnati Reds mascots cheer from the outfield during a baseball game against the Pittsburgh Pirates at Great American Ballpark in Cincinnati, Thursday, Aug. 13, 2020. (AP Photo/Bryan Woolston) 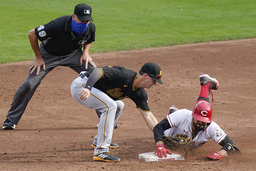 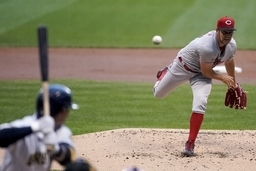 CINCINNATI (AP) The Cincinnati Reds became the third Major League Baseball team to have games called off because one of its players tested positive for COVID-19.

The last two games of a series between the Reds and Pittsburgh Pirates at Great American Ball Park were postponed Saturday after one Cincinnati player tested positive.

The Reds join the Marlins and Cardinals with games called off because of positive tests on their roster, creating a ripple effect through the schedule that has limited some teams to a handful of games.

Major League Baseball was awaiting further test results and doing contact tracing to gauge the extent of the concerns. The Reds had one player sidelined earlier this season after a COVID-19 test that later turned out to be a false positive.

Matt Davidson tested positive during the opening series of the abbreviated, 60-game season and went on the injured list. Later tests cleared him. Three other Reds - Joey Votto, Mike Moustakas and Nick Senzel - missed games after feeling sick, but tested negative for the coronavirus and rejoined the team.

It was more unplanned time off for the Pirates, who opened the week with a three-game series against the Cardinals postponed. They split the first two games of their series with the Reds.

MLB postponed the rest of the series seven hours before the scheduled first pitch on Saturday night. Both teams are off Monday. The Reds have already played one seven-inning, makeup doubleheader this season necessitated by a rainout.

Rescheduling because of the coronavirus has resulted in a wide range of games played by MLB teams.

St. Louis resumed Saturday in Chicago against the White Sox after a 17-day pause. The Cardinals had played a total of five games, fewest by any team in the majors. By comparison, a dozen teams had played at least 20 games.

The Cardinals had a coronavirus outbreak that spread to 18 members of the organization.

Miami had the first outbreak on the season's opening weekend. At least 18 players were infected. The Marlins headed into their game Saturday with a 9-4 record - second-fewest games in the majors - but first place in the NL East based on winning percentage.