LEADING OFF: M's-Giants shift because of fires, Hamels debut 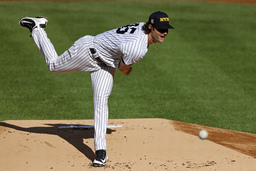 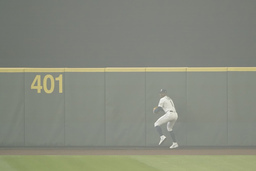 Seattle Mariners center fielder Kyle Lewis prepares to throw the ball back to the infield after making a catch as the air is filled with wildfire smoke during the first baseball game of a doubleheader against the Oakland Athletics, Monday, Sept. 14, 2020, in Seattle. (AP Photo/Ted S. Warren)

The Mariners and Giants play at Oracle Park after their two-game series in Seattle was postponed because of poor air quality caused by the West Coast wildfires. The teams will now play twice in San Francisco.

Forecasters are calling for smoke to reach very unhealthy levels in Western Washington through at least Thursday. There have been smoky skies in the Bay Area, too, but the air quality has remained OK.

The Mariners and Oakland split a doubleheader Monday in Seattle. The smoke level reached a level of very unhealthy on the air quality index, even with the roof closed at T-Mobile Park.

''I'm a healthy 22-year-old. I shouldn't be gasping for air or missing oxygen. I'll leave it at that,'' said Jesus Luzardo, who started the opener for the A's.

The wait is over for left-hander Cole Hamels, who is poised to come off the 45-day injured list and pitch for the first time as a member of the Braves.

After signing a one-year contract with Atlanta in December, Hamels arrived at spring training with a sore shoulder. Then, he developed triceps tendinitis during summer camp.

The rehab, at long last, is done and he'll start against Baltimore at Camden Yards. And at a good time for a team that's leading the NL East despite several injuries to its pitching staff.

''Now it's just a matter of being around these guys. That's the thing you miss the most,'' Hamels said. ''I was able to watch them play, but you're not able to celebrate with them.''

The 36-year-old Hamels has designs of carrying the Braves into the playoffs and deep into the postseason. Pitching is what he does best, and the four-time All-Star hasn't done it competitively since last September.

NL East foes Jacob deGrom (4-1, 1.67 ERA) and Aaron Nola (5-3, 2.40) are set to face off for the second time in 10 days after rarely sharing the mound during their careers. In just their second career matchup on Sept. 6, the Mets pounded Nola and the Phillies 14-1, although Nola was only charged with three earned runs.

DeGrom goes into this game at Citizens Bank Park likely get three more starts this season to cement his case for a third consecutive NL Cy Young Award. He entered Tuesday with the NL's best ERA and tied for second in strikeouts behind the Reds' Trevor Bauer.

TOO EARLY TO JUDGE

Yankees slugger Aaron Judge could come off the injured list and return to the lineup to face the Blue Jays in the Bronx.

Judge missed two weeks in late August with a strained calf, was activated, played one game and then went back on the IL. The All-Star right fielder was off to a big start this season with nine home runs and 20 RBIs in 18 games.

Gerrit Cole (5-3) starts for New York and Tanner Roark (2-1) for the Blue Jays in the race for second place in the AL East. At 99-55 lifetime, Cole looks to join Justin Verlander, Roy Oswalt and Mark Mulder as the only pitchers since 2000 to reach 100 wins in 203 or fewer appearances.