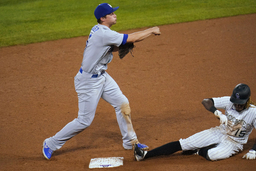 Los Angeles Dodgers shortstop Corey Seager, left, throws over Colorado Rockies' Raimel Tapia after forcing him out at second base on a ground ball hit by Charlie Blackmon, who was safe during the sixth inning of a baseball game Thursday, Sept. 17, 2020, in Denver. (AP Photo/David Zalubowski) 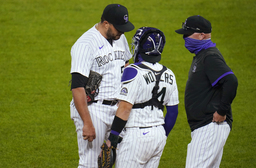 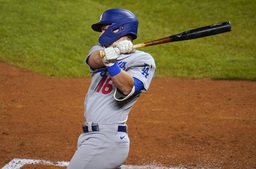 Los Angeles Dodgers' Will Smith follows through on a two-run double off Colorado Rockies relief pitcher Carlos Estevez during the seventh inning of a baseball game Thursday, Sept. 17, 2020, in Denver. (AP Photo/David Zalubowski) 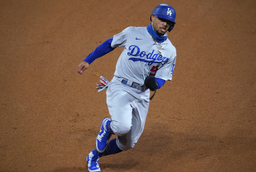 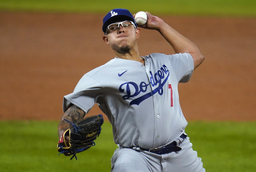 Mookie Betts had an RBI single and scored on a wild pitch during Los Angeles' six-run seventh inning that put the Dodgers ahead 8-2. Los Angeles is 36-15, best in baseball, and increased its lead in the NL West to four games over idle San Diego with nine games remaining for each teams.

Dylan Floro (2-0) got the win with an inning of relief for starter Julio Urias, who retired 15 of the last 16 batters he faced.

''There was a bad first inning with a lot of pitches, and I was able to stay focused and try to work as fast as possible in the late innings,'' Urias said. ''There were a lot of pop flies, but they were able to be fast outs.''

Trevor Story homered for Colorado, which lost ground in the NL wild-card race. At 22-27, the Rockies are two games behind Philadelphia for the final postseason berth and have struggled offensively of late. They have scored just 11 runs in the last five games, all at home.

''I have a lot of confidence in our team. We haven't been getting the job done of late, offensively,'' Story said. ''We know how quick that can happen. I do believe we have what it takes and hopefully start that tomorrow.''

Colorado scored twice in the first to go up 2-0, but Seager led off the fourth with a homer, his 13th, to start the comeback. A hit by pitch with the bases loaded tied it, and LA blew it open in a sloppy seventh inning for the Rockies.

Betts singled to drive in a run, Seager had an RBI double, Will Smith hit a two-run double and a wild pitch by Carlos Estevez and a passed ball by Tony Wolters gave the Dodgers a sixth-run inning.

''Some miscues that they make, and give us extra outs, and it's good to see us capitalize,'' Dodgers manager Dave Roberts said. ''But that's how you have to play, especially here.''

Rios hit his fifth homer leading off the eighth.

Colorado starter Kyle Freeland (2-2) took the loss despite being sharp early. He allowed four runs and six hits in 6 1/3 innings.

Dodgers: Roberts said LHP Caleb Ferguson will have Tommy John surgery after a tear in his UCL was discovered during an MRI on Tuesday. ... OF Joc Pederson (family medical emergency leave) will miss the weekend series against Colorado and may return early next week. ''The goal is to get Joc back on Tuesday,'' Roberts said.

Dodgers: Roberts said Friday will be a bullpen game and has not announced who will get the start.

Rockies: RHP Ryan Castellani (1-2, 4.46 ERA) will make his eighth start and ninth appearance of the season. The rookie went 4 1/3 innings in his only start against the Dodgers, Sept. 6 in LA, and got a no-decision into Colorado's 7-6 win.