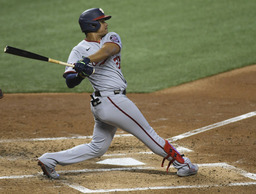 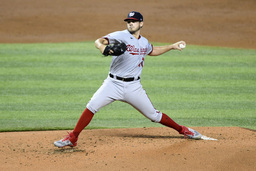 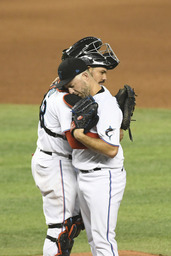 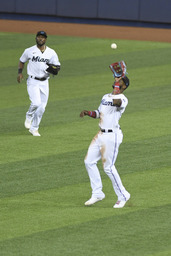 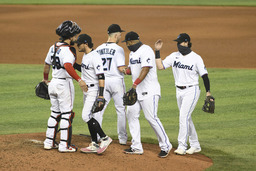 MIAMI (AP) Despite a blowout loss, the Miami Marlins will embark on their first meaningful week to close a season since their 2003 World Series championship run.

Kurt Suzuki homered and doubled to bounce back from a game-ending strikeout in the opener, and the Washington Nationals routed the playoff-contending Marlins 15-0 Sunday to split a doubleheader.

In the opener, Marlins reliever Brandon Kintzler fanned Suzuki with the bases loaded to preserve a 2-1 win.

The split kept Miami a game ahead of Philadelphia for second place in the NL East. The top two teams in each division make the playoffs, along with two wild-card clubs in each league.

''You're not going to roll your way in, you know it's going to be like this,'' Miami manager Don Mattingly said. ''Every game is a grind. Every game is a battle. You've got put every game behind you, good or bad.''

''If you've been around enough, played in enough of them and coached enough of them, pennant races - you know this is what you're in for,'' he said.

Trea Turner homered on the first pitch of the second game and Michael A. Taylor, Asdrubal Cabrera and Victor Robles also connected for Washington. Juan Soto had three hits and scored four times.

''This game is unbelievable,'' Washington manager Dave Martinez said. ''That's why we love to come out here. That's why they love to play it. First game, we can't score any runs. We had opportunities. The second game, we score a bunch.''

Suzuki and Taylor hit solo shots in the third and chased Braxton Garrett (1-1). The left-hander, who was called up as the 29th man for the doubleheader, allowed five runs on five hits and two walks.

''It's just been a weird season,'' Suzuki said. ''You try not to dwell on the negative and you try to look at all the positives, and go from there.''

In the first game, The Marlins scored an unearned run off Max Scherzer in the sixth on a two-out error by first baseman Eric Thames.

Washington threatened in the seventh and final inning when Luis Garcia led off with a single and pinch hitter Yadiel Hernandez followed with a ground-rule double off Kintzler.

After Andrew Stevenson flied out to short right, Turner hit a hard smash to Kintzler, who got Garcia out on a rundown that left runners still at second and third. Soto was intentionally walked before Kintzler struck out Suzuki for his 10th save.

Pinch hitter Starling Marte hit a grounder down the line that third baseman Carter Kieboom fielded, and his low throw bounced off Thames' glove for an error.

Sandy Alcantara (3-2) allowed one run and five hits in six innings. He walked four and struck out four.

''That was fun,'' Alcantara said of his matchup with Scherzer. ''He enjoys what he's doing and I enjoy what I'm doing.''

Miami finished 9-6 in its homestand, which included four doubleheaders.

''I thought we survived this homestand,'' Mattingly said. ''We knew it was going to test us. We look forward to playing one a day and prepare for those games.''

The Marlins activated Berti from the injured list and designated INF-OF Sean Rodriguez for assignment.

Nationals: INF Howie Kendrick (left hamstring strain) has done light running and continues to make progress in his attempt at returning before the end of the season ... RHP James Bourque left with an undisclosed after surrendering Marte's double that started the sixth

Marlins: LHP Trevor Rogers (1-1, 6.00) will start the opener of a four-game series at Atlanta Monday night.